The 2014 junior Manx Grand Prix began with Rob Hodson going into an early lead at Glen Helen and from here the rider who finished third in 2013 super twins Manx Grand Prix built up a 6.6 second lead by Bungalow over Andy Lawson in second position whilst Michael Moulai obtained third position.

As Rob Hodson went through the Bungalow on lap 2 he had built up over 14 seconds advantage over Andy Lawson in second place. At the end of lap 2 Hodson had a 12.1 lead over Lawson with Moulai and Farrell both still in the hunt for junior Manx Grand Prix victory.

Rest of third lap saw positions out front remain largely the same with one notable exception as Michael Moulai dropped out due to reliability issues by Glen Helen early on during final lap this meant Andy Farrell was now into third position with Andy Soar occupying fourth position.

James Neesom who was in the top five pulled out on lap three where Andy Lawson built up a decent advantage over Billy Redmayne hugely impressing in second position, by end of lap the gap out front was 18.5 seconds.

Onto the final lap and Lawson competing on Moto design backed GSX-R 600 Suzuki kept up a decent pace as he began to home in on his first Manx Grand Prix victory. Billy Redmayne winner recently of newcomers A Manx Grand Prix was chipping away at Lawson’s lead with the gap by Ballaugh bridge down to just 16 seconds.

Despite a superb lap speed of over 119 mph on lap four Billy Redmayne had to settle for second position as Andy Lawson clinched a hard earned junior Manx Grand Prix win. 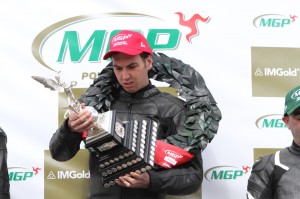 Andy Soar was a highly creditable fifth as Kamil Holan newcomers A winner back in 2012 completed top six. Marco Pagani produced one of the performances of the race finishing in seventh position as Glenn Harrison, Paul Smyth and Warren Verwey finalised the top ten.