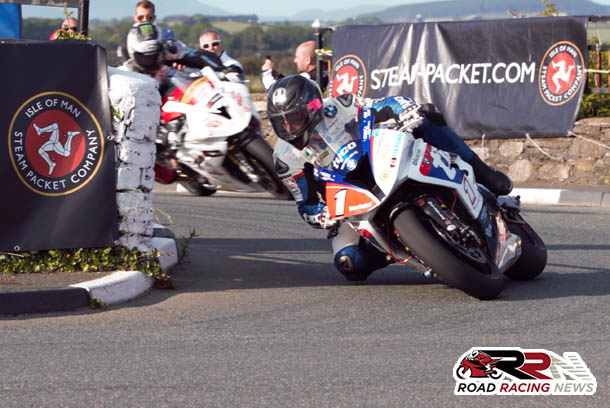 In glistening evening sunshine, the Senior race of the 2015 Southern 100 provided fans around Billown, plus listeners worldwide on Manx Radio with a pulsating battle for class honours between roads superheroes Guy Martin and Michael Dunlop.

At the time my report on the captivating evening action at Billown, was as follows:

By the end of lap one Martin held a 1.4 second advantage over Dan Kneen, whilst Michael Dunlop was showing true grit on his own teams S1000RR BMW in holding third position.

Onto lap two and race leader Guy Martin increased his lead at Cross Four Ways, but newly into second position Dunlop was on a charge showing why he is an 11 times TT Races winner.

Dan Kneen in third position was showing his proven quality on the Valvoline Racing by Padgetts Motorcycles CBR 1000 Honda Fireblade.

As lap two entered its conclusion Martin’s lead out front was down to 0.7 of a second as Dunlop in second place was closing in on the Tyco BMW rider. 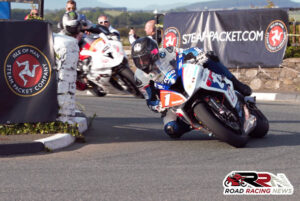 Lap four saw leading duo Martin and Dunlop firmly clear of third positioned Harrison, both S1000RR BMW mounted riders were trading 0.4 there, half a second there as the gap out front varied.

By lap five Michael Dunlop was starting to pile the pressure and some on Guy Martin, the stage was set for a classic duel in the closing laps between the riders who both have over 18 International road race victories.

With Martin’s lead reduced further by Dunlop on lap six, a highly compelling, captivating seventh and final lap was in prospect.

Martin lead at Cross Four Ways but Dunlop was in determined mood, there was now absolutely nothing in it between them as they homed into Castletown Corner.

At Castletown Corner on the final lap you could hear the crowd cheering, showing their appreciation for both riders as they powered their way to the chequered flag.

At the line Tyco BMW’s Martin just held off Dunlop by only 0.092 of a second, it’s the third time that the 11 times Ulster Grand Prix winner has won the Senior race during the Southern 100.

Dean Harrison finished a fantastic third as he battled away on the Mar Train Racing YZF R1M Yamaha.

A fantastic Senior race around Billown, it was one that saw yet another great, tumultuous, world class battle between worldwide popular International road racing stars Guy Martin and Michael Dunlop.