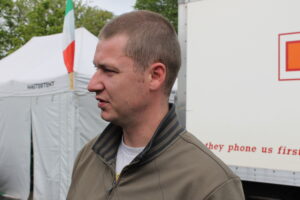 Richard Mcloughlin is excited about Monster Energy supersport TT races this year. Richard competing on a CBR 600 Honda for his own team has recorded consistent lap speeds during TT 2014 practice week to qualify for both ultra competitive races.

Having made his Manx Grand Prix debut last year where Richard achieved a fine 4th place finish in newcomers A race he is greatly enjoying competing in his first Isle of Man TT.

The talented rider is aiming to enjoy TT 2014 and hopefully secure personal best lap times having lapped at over 113 mph during 2013 Manx Grand Prix.

Plus Richard will be looking to secure good results in both supersport TT races which always provide close exciting entertaining races.