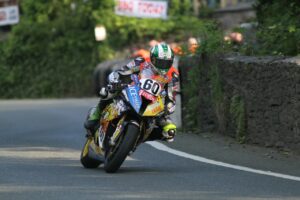 Peter Hickman is adapting superbly to the Isle of Man TT. Peter making his TT debut competing for Ice Valley racing by Motorsave ltd set a brilliant lap speed of over 119.6 mph during Tuesday nights practice session and is greatly enjoying competing on the mountain course.

Hicky’s dad Dave has raced on the worlds most famous road race and has being a Manx Grand Prix winner so its in the genes that Peter has adapted so well this year making his TT debut. 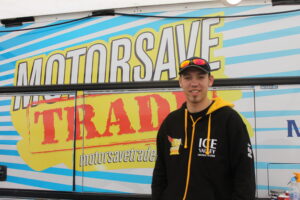 Plus the immensely talented rider has taken to road racing in the right way enjoying it and taking it one step at a time. At North West 200 Hicky was leading newcomer in what was a brilliant meeting for him which included 9th place finish in opening superstock race.

A 120 mph lap is on the horizon for the Ice Valley racing by Motorsave ltd rider who is BMW mounted for superbike, superstock and senior TT races.

The combination of a smooth riding style, being quick and the quickness of getting to grips with the most famous road race circuit in the world has seen Peter star during TT 2014. There’s no doubt in the future that the ability and talent is there to record a debut TT win.