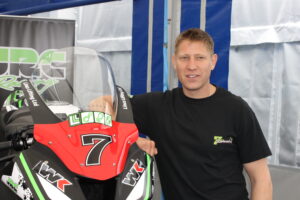 Gary Johnson has multiple good chances of victories across all classes at TT 2014. Gary competing for JRC racing on CBR 1000 Honda Fireblade and ZX10 Kawasaki has had a consistent start to TT practice week with quickest lap speed so far over 127.7 mph.

The supersport races sees the rider known to many as aka driver competing on Smiths Triumph supersport bike. After a successful first few races on the bike at North West 200 Gary is greatly confident of the potential of the bike which has being proved already this week at TT 2014 by lapping at 123.5 mph to be currently second quickest so far in supersport class during practice week.

2011 supersport TT race two winner Gary is CF moto super twin mounted for lightweight TT race. During winter months a lot of development has gone into the bike to make it much more competitive and already a lap speed of over 114 mph has proved that the potential is there for a good results in 2014 lightweight TT.

Gary said about the CF moto twin that its quick and powerful and has a good chassis on it as well as a moto 2 fairing. There is no doubt that Gaz will be competitive in each TT race this year as he aims for his second win on the mountain course.