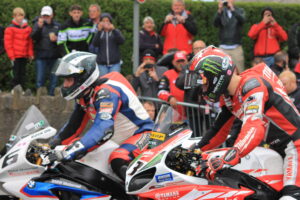 In a practice session which was brought to a halt early after a red flag incident and persistent rain Michael Dunlop finished on top superbike practice after completing one lap on factory backed S1000RR BMW. Michael lapped at 128.6 mph to finish quickest in front of Guy Martin.

Guy lapped at over 128 mph on Tyco Suzuki by TAS superbike and looks in good form during practice week at TT 2014. William Dunlop continued his good form finishing third quickest lapping near the 128 mph bracket at 127.911 mph.

Michael Rutter lapped at 126.719 mph whilst Dean Harrison set his quickest lap speed so far at this years Isle of Man TT with lap speed of 126.521 on RC express racing ZX10 Kawasaki.

Dan Cooper impressed lapping over 121 mph in finishing second quickest in superstock class in front of Ryan Kneen who is riding brilliantly lapped at 120.404 mph to finish third fastest in class.

Bruce Anstey lead the way in supersport class proving his speed in the ultra competitive class by lapping at 123.127 mph which puts Bruce overall in top five overall in supersport practice sessions so far this week.