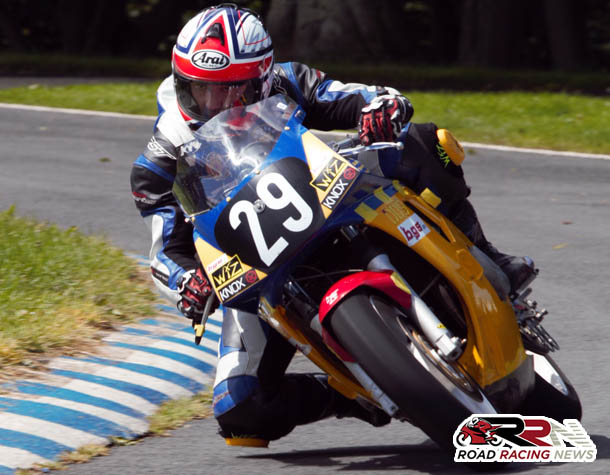 Synonymous with his blue, yellow liveried 400 Yamaha, with which he’s enjoyed countless victories, podium finishes, his answers to the Scarborough themed set of questions are as follows:

“First memory was visiting with friends in the 90’s. I’d only ever watched at Donington, Oulton and Assen and couldn’t believe how close to the bikes you got as a spectator.

I remember watching Nick Jefferies, Dean Ashton and the ensuing pack barreling into the Esses on the first lap and thinking it was absolutely nuts.

You could feel the air being displaced and you’d get the smell of the bikes. I was hooked from there. It’s definitely the best spectator spot on the mainland.”

“There’s an anticipation and excitement that’s seems to be different to other places. I suppose I get different feelings from different tracks.

The Mount is iconic and your taking part in its history. My 91 year old neighbour talks about riding across with his missus and watching Geoff Duke.

It’s weird how it was just a place to go racing your bike, then becomes part of your own story too, which is pretty special for a strip of tarmac on a hillside, on the opposite coast.”

“Gotta be the Esses. Right from first memories of the Mount, to riding it for the first time in 2005 (if the memory is correct), it’s a really technical bit too.

I’ve saved front end sides there and felt like a god and lobbed it in there hedge and felt like an idiot. You get such a great feeling from getting it right, it’s such a round peg round hole feeling.

I like the little left link beforehand and then that ‘up and over’ change of direction, to then load up the front and then that grass scrubbing exit as you try and feel how much liberty you’ve got with your right hand.

All of that changes with every day, temperature/weather type too Those lovely warm constant weekends are the best though, when you can lob it in and gas it out with full confidence. Real nice!”

“Without a doubt, winning the Phil Mellor Trophy. Being the first ever production bike winner of that was incredible.

The names on that Trophy are a real who’s who of Road Racing, in terms of 250 GP riders, so to get my name on the same trophy and become part of that as a proddie racer was very special to me. It just goes to show, that if you persevere and make the grids, good stuff does happen.” 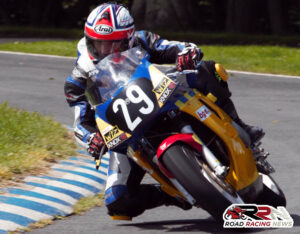 “I don’t do heroes to be honest. Can’t stand all that cooing and idolising. To me the rest of the paddock is just other riders, irrespective of what your name is. You’re either somebody that I have the crack with or not, that’s pretty much it for me.

The heroes of the Mount are the people who we see daily but never notice. It’s the Marshals and Medics. I know all that sounds a bit contrived but when your talent runs out and you turn yourself upside down, and your in a position where you know you need help, seeing that orange jacket and hearing a voice means the process of sorting out your stupid mistake has started.

Especially when you have confidence that that process is going to be dealt with professionally. That’s a really good thing to be able to rely on.

If I was forced to blow smoke up someone’s hoop. For me it would be Dwyer Agnew. That lad nailed everything he ever put his arse on but his enjoyment of riding bikes showed in the way he rode.

No flash kit, fancy vans, logo’s leathers, Gucci paint, just air born, wheelies and sideways at every opportunity. He’d do it on a C90 if you gave it to him. Enjoying it was his biggest motivation. Gotta love that ethos.”

“A Moto 3! Definitely! They produce the best racing by far. They are exquisite to look at and I just love small stuff racing.

There’s a real finesse to it. Getting a small bike up to speed and then squeezing every last mph out of it is a talent.

It’s a pity they are so cost prohibitive. If you’re a working lad or lass with a van, what are you most likely to be able to a afford. A F400, Supersport 300 or Moto 3 bike. Unfortunately the money dictates a proddie option.”

“That’s a toss up between frustrating and rewarding. Getting a perfect lap gives you a great feeling, it’s like you could do it all day long. You know it inside that you’ve done it. It’s a real zone thing. So that’s the rewarding bit. It feels great.

So trying to get to that can be frustrating. It feels ragged and lairy and you know without looking at a time sheet, that it isn’t good enough. I suppose I should use one word as ‘challenging’ then!”

“That’s got to be Paul Gartland. I met Paul in 2008 after a 600 race were we knocked lumps out of each other, on every lap. Real nip and tuck and ragged stuff. It never settled down.

After the race, he pulled up alongside me in the paddock and I thought, oh here we go!, he’s not happy! Anyhow he flipped his visor up an shouted ‘That was f****n brilliant’ and shook my hand. That was it really.

From there we’ve locked horns on many occasions and been fairly lairy with each other at times, but racing close with Paul never concerns me. He’s tough but not dangerous. That can’t be said for everyone in the paddock. Striking that balance shows what a good competitor he is.”