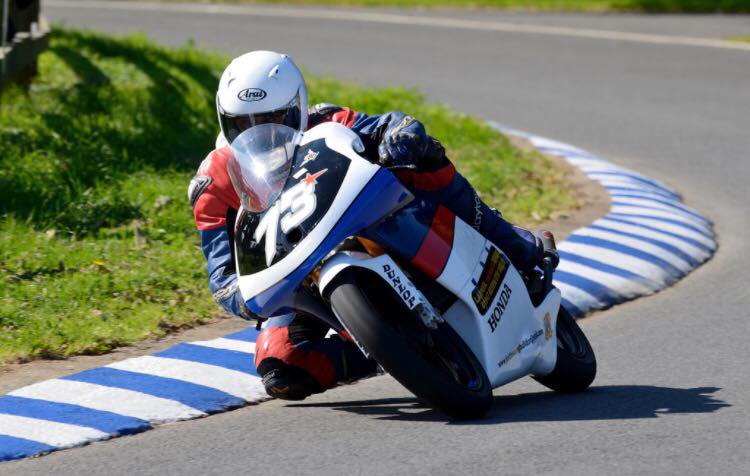 Set to pilot in the near future at the Mount, a John Chapman backed Moto 3 steed, his answers to the Scarborough themed set of questions are as follows:

“Watching Ian Lougher in 2003 on the new CBR RR 600 Honda from Druids, and thought I wouldn’t mind having a pop at this!

It was my first season of club racing and I never thought I would be winning there, 14 years later.”

“My favourite part about the racing at Scarborough, is when the lights go out and all your senses come to life. You have to be mega focused for the entire race, the fear before you set off just vanishes replaced by ultimate focus.

You just can’t get it wrong in many places round the circuit, as we are all aware of. Then after the race relaxing and coming down off the rush.”

“There’s a lot of good parts of the circuit that I like. Well to be honest I like every bit but my favourite is the Esses at the top of Sheene’s rise.

I don’t go as well as I used on that section, need to get full confidence back there, due to 2013 Gold Cup were I lost the front in practice and went into the fence, ouch! I was really pushing the boat out round there it was inevitable really.

But afterwards Chris Palmer complemented me at my line and speed through there. I have had another incident there passing a 400 on the outside he was to slow to be honest for the race, things were getting a bit dangerous there should be a tight qualifying time because, and I’m not being a twat but it is dangerous.

Anyway I went on the outside of the corner, a safe pass and he went way off line and made me sit up, luckily I managed to come to a safe halt on the grass.”

“It’s got to be beating Ian Lougher at the Spring Cup in 2017, by around 0.3 of a second over the line on the Moto 3 machinery. I really mentally prepared for that race with a good plan and it worked by a cats whisker.”

“It’s got to be Guy Martin due to what he has done there. He was there at my first meeting and he’s got a great personality, plus he also took me round the TT circuit to help me with my lines. I got on really well with him, he is one character I won’t forget in a hurry.”

“To be honest I only like riding the Moto 3 bikes, they are quick enough for me and been a short arse I can touch the floor. On a serious note, come on they are proper Grand Prix bikes, the last one I rode was from Moto GP, a Kalex one, that was rode by Jorge Navarro, which I got off Ryan Saxelby, another good honest lad.

Hopefully start getting full grids of Moto 3 this year, and John Chapman has been so kind to let me ride the ex Repli-Cast UK one this season. John is such a nice guy.” 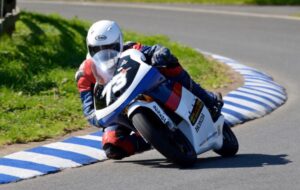 “Got to be Ian Lougher, he’s the dude. If you follow him and keep up with him you can learn so much. It’s like he is on a mono rail round there, every corner on every lap is 100 percent perfect.

I tend to stay behind him then go for it on the last lap, because I never really gain anything by passing him earlier and to be honest when I try for the pass on the last lap, I need to really pull my finger out my a**e and ride 110 percent rather than 99 percent.

And I don’t like riding that hard for a long time. Two minutes is enough, I have to go to work on Monday. It’s all about weighing up the risk, if in doubt tone down the throttle.”