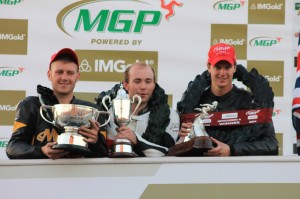 Newcomers Manx Grand Prix for 2014 began in fine conditions all round with Matthew Rees surging into an early lead in newcomers A class on GT superbikes backed ZX6 Kawasaki.

Onto lap two and having gone straight through Egan was into the lead for first time on Askeaton paving.com backed GSX-R 750 Suzuki. Sam West also having not pitted at end of lap 1 was second with Malachi Mitchell Thomas slotting into third place having pitted which meant theoretically he was the new race leader.

Positions out front remained largely the same for rest of lap two but Mitchell Thomas was growing his lead over Billy Redmayne in fourth place as Matthew Rees occupied fifth position with Frank Gallagher showing excellent form in sixth position.

Onto the final lap and Egan and West went in four their pit stops which meant Mitchell Thomas now lead by over four seconds over Redmayne in second position with Matthew Rees continuing to be close to be a podium finish.

Malachi Mitchell Thomas’s lead out front grew to 5.7 seconds by Ramsey hairpin on lap three with Billy Redmayne in second position still in with a great chance of newcomers A Manx Grand Prix victory.

As the leaders went over the mountain on final lap Redmayne by the Bungalow was into the lead by 0.9 of a second. From here the CBR 600 mounted rider held his nerve to secure at the finish line a superb newcomers A Manx Grand Prix win.