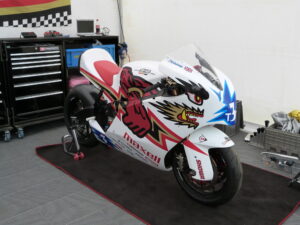 2013 saw Mugen back with John Mcguinness, John went onto in second place only just missing out on victory, John lapped at over 109 mph during the race. Going into this years race Mugen will be looking for their first TT zero victory, both John Mcguinness and Bruce Anstey are road racing and TT heroes and the combination of both in the Mugen performance team adds an extra exciting edge to the 2014 TT zero race.