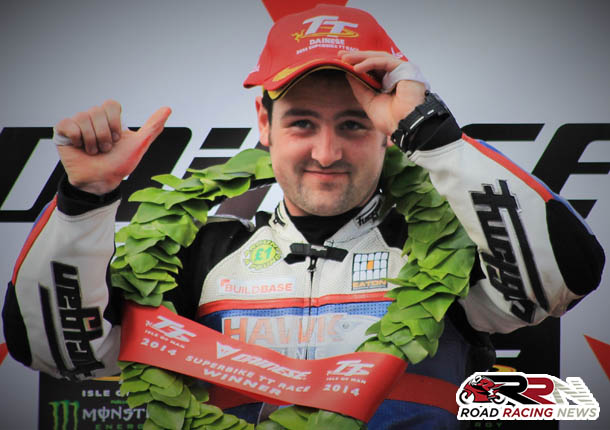 After a winter of discontent, February of 2014 saw the announcement that BMW where returning in full factory form to the Isle of Man TT, for the first time in 75 years.

Leading the official BMW line up, would be Michael Dunlop. Michael would be piloting a S1000RR BMW prepared by Hawk Racing, which produced a staggering 225 BHP.

Given the undoubted power plus top end speed of the bike, the big question going into TT 2014, was how would it handle and how stable would it be around the magical Mountain Course.

Prior to TT 2014, the best result in recent years by a rider on a BMW at the Isle of Man TT, came in the previous years superstock race, where Steve Mercer competing at the time for Penz 13.com BMW, finished a more than creditable eighth.

Feature superbike race victory at the North West 200 was proof, that the decision Michael made in quitting the official Honda team was vindicated.

Honda Racing, Tyco Suzuki, Padgetts where still considered by many favourites for superbike success at TT 2014, Michael and BMW though where quietly confident of securing victories in the marque superbike and senior races.

Lap speed of 131.501 mph, stunned the paddock, it was his fastest lap speed at TT Races, plus it placed him comfortably on top of the superbike practice leader board.

Near perfect conditions greeted competitors prior to the start of the Dainese superbike TT.

In ultra determined mood from the start, Michael surged into race lead, by the end of lap one, he held an advantage of over nine seconds, over nearest pursuer Guy Martin, having set a new outright lap record lap speed of 131.730 mph.

Lap two saw another new lap record, as he propelled the BMW Hawk Racing machine, to lap speed of 131.890 mph.

With a firm grip on the race, the following four laps would see him maintain a top class pace, consistently holding a race lead in excess of 20 seconds.

At the end of the sixth and final lap, he crossed the line to take his eighth TT victory setting a new race record in the process. 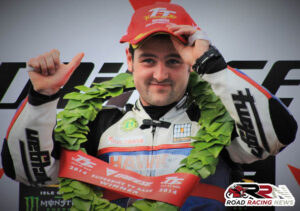 This win also marked the end of Honda’s domination of the superbike class, it’s fair to say many did not think the BMW was the machine to propel Michael to victory, he thought different, and had no doubts at all about reliable and stable it would be.

Next race on the horizon, was the opening Monster Energy supersport encounter.

In tricky conditions around the Mountain Course, Michael produced a highly accomplished performance to finish third, in a race which saw Gary Johnson give Triumph their first TT victory, in eleven years.

The Royal London 360 superstock race, saw the rider nicknamed Maverick, back on the top step of the podium, following a textbook performance on his own teams S1000RR BMW.

It was his third superstock TT success, all three stock TT wins had been on three different makes of machinery, Kawasaki, Honda and BMW.

Monster Energy supersport race two, would see Michael make up for the disappointment of the opening race, by producing yet another performance of the highest quality.

He held off strong challenges from Bruce Anstey and brother William, to seal his tenth TT Races victory.

Ironically he was the only rider to be victorious on a Honda in the solo classes at TT 2014.

The scene was set for the blue riband Pokerstars senior TT, the one that everyone wants to win.

Having sealed three wins, lapping close to the 132 mph mark, in arguably the form of his life, was Michael about to bring home the senior TT trophy?

Lap one saw him make by his standards a slow start, at Glen Helen on lap 1 he was down in seventh, it was his brother William Dunlop who went into an early race lead.

Quickly though the factory BMW was on the charge, overhauling William, Guy Martin and Conor Cummins for race lead, at the end of lap one.

Onto lap two and Michael Dunlop was starting to pull away from the chasing pack, still though going into the pits at the end of lap two, it nip and tuck between the top four.

With William Dunlop crashing out of contention on lap three, it was left to Conor Cummins to provide the challenge to Michael.

Despite reducing the gap at one point to under five seconds, laps five and six saw Michael do everything he had to do to maintain a fairly comfortable advantage.

At the finish line he was victorious by 14 seconds to record his first senior TT win.

It marked the end of a quite magnificent two weeks competition around the Mountain Course, for a rider who had established himself in just eight years competition at TT Races, as one of the all time TT greats, with now 11 TT victories in total.

Two other significant feats from TT 2014 well worth noting, where becoming the first rider in TT history to secure twice four wins in a week, plus retaining the Joey Dunlop championship title.

Having created history with BMW, it was a shock in October of 2014, when it was announced that BMW would not be running Michael Dunlop next year at the international road races.

Although as surprised as everyone, Michael was still hugely looking forward to TT 2015, which would prove another memorable TT Races for him, but this time for not the reasons you would expect.