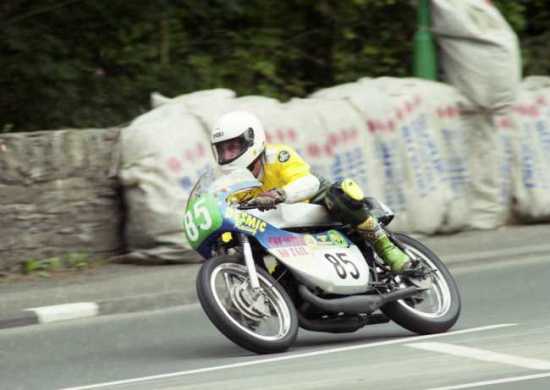 17th within the 1998 Lightweight TT won by the legendary Joey Dunlop, his answers to the Mountain Course themed set of questions are as follows:

“As a Manxman having been born and brought up with road racing it was obviously my life’s ambition at that time to compete on the TT course.

I remember as a newcomer being first away (on purpose!) with Ian Simpson. I recall sitting on the line looking towards St Ninians as Clerk of the Course Jackie Wood made his speech over the tannoy.

I could hear my nan’s voice saying “You haven’t got to do this. Nobody will think any the less of you if you just leave it now”. But a voice in my other ear said, well you have waited a long time for this and it’s finally about to happen, have fun! and I did!!”

“I am very much a fan of two stroke race bikes. I have raced a few in the Manx. TZ Yamaha, Honda RS 250, Spondon Rotax Waddon, Suzuki T20 etc.

But the TZ (Yamaha) has to be the best. The Padgetts machine I rented in 1996 (a 94 model) was exotica I could never have afforded to buy.”

“Well I was fortunate enough to win the Manx in consecutive years 1999 and 2000 but the first win was absolutely the greatest moment in my whole racing career.

I have the race on tape and even now I get very emotional when I listen to it. Getting a 500 Honda in to 6th in the Classic Senior, even with a fuel stop and lapping at nearly 103 was also a good day.” 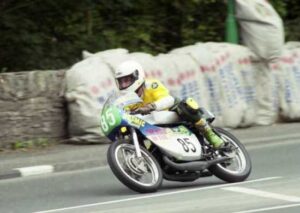 “I would say probably Danny Shimmin and Pat McLaughlin would be my two MGP riders I looked up to and I respected both of them so much.

Both great characters but neither any longer with us sadly. They both influenced my own MGP career in their own respective ways.”

“Almost impossible to answer with one word but I would suggest ‘fulfilling’. On a competitive and social level.”

“Yes I have often thought of this. I would have loved a race on something like the Santiago Herrero 250cc Ossa.

The disc-valve MZ as raced by Derek Woodman, Heinz Rosner and others, plus I always would have loved to race a good competitive 350cc Aermacchi but they are expensive exotica more recently and with my track record nobody apparently felt like taking that risk!!”