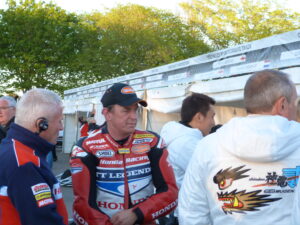 John Mcguinness is all set for the Isle of Man TT in 2014 with the official Honda team. John at this years Isle of Man TT proved he is still a force to be reckoned with following his magnificent senior TT win and a new lap record in the superbike TT race with a lap speed of 131.671 mph. Alongside winning the senior TT this year John achieved 3rd place finishes in the superstock race and in the second supersport race. John finished second in the TT zero when competing on the unique Mugen Shinden Ni bike.

Plus in 2013 John recorded a solid fourth place finish in the Macau Grand prix, John’s 4th place finish was the best result for John at the Macau Grand prix since 2008. Alongside competing at the Isle of Man TT next year John is also back at the North West 200 where John won the opening superbike race back in 2012. John Mcguinness is one of the best road racers of all time, his win in the senior TT race for 2013 will go down as one of John’s best ever wins at the Isle of Man TT, expect in 2014 more success for the great man from Morecambe.

Mike Minns Set For The Manx Grand Prix In 2014