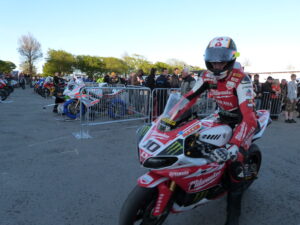 Conor Cummins has joined the official Honda team for next years Isle of Man TT. Conor this year has had a consistent season of racing which has included at the Ulster Grand prix a top three finish in the second supersport race and a superb third place finish in the second superbike race. The Armoy road races saw Conor record 5th and 6th place finishes in the superbike races whilst the North West 200 saw Conor in the superstock race finish in sixth place.

This years Isle of Man TT saw Conor back on the podium by finishing third in the lightweight TT race. Plus Conor went onto achieve a 5th place finish in the superbike TT race alongside finishing in the top 10 of the second supersport TT race. Alongside achieving podium finishes in 2013 at the Isle of Man TT and Ulster Grand Prix Conor produced a fantastic performance to finish in second place in this years formula 1 TT classic race. Joining the official Honda team for next year is a fantastic opportunity for Conor which will give him arguably his best chance of winning his first Isle of Man TT race.