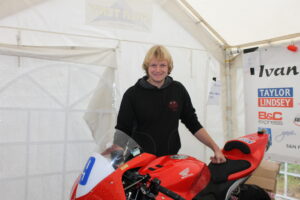 Ivan Lintin is set to compete in all classes at next years Isle of Man TT. Ivan this year at the Isle of Man TT produced a fantastic ride to finish in 4th in the lightweight TT race when competing for Mckinstry racing on a ER6 Kawasaki. The supersport races saw Ivan achieve top 15 finishes when competing on a Taylor Lindsey backed ZX6 Kawasaki.

For 2014 Ivan is competing in the supersport races on a CBR 600 Honda which Ivan competed on for the first time at this years Scarborough gold cup recording top five finishes in both supersport races. Ivan is back with the Mckinstry racing team competing on a ER6 Kawasaki for the lightweight TT race, Ivan this year in the super twin class competing for Mckinstry racing achieved his first international road race win at the Ulster Grand prix and was runner up in the second super twin at this years Southern 100. Ivan is also competing in the superbike, superstock and senior TT races on a CBR 1000 Honda Fireblade, Ivan Lintin is one of the most improved riders at the Isle of Man TT in recent years expect next years Isle of Man TT to be a great one for Ivan.