Michael Dunlop Set To Take A Year Out From Road Racing 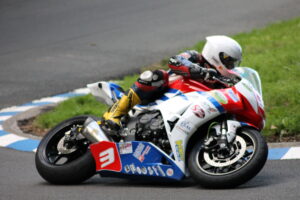 Michael Dunlop has announced today that he is set to take a year out from road racing, its a shock to many as Michael has in 2013 won at every road race that he has competed at, an amazing achievement. Michael’s 2013 road racing season began at the Cookstown 100 road races, where Michael won both superbike races and set a new lap record.

Following on from this Michael went onto win the opening supersport race then win the superstock TT race after a stunning final lap saw Michael lap at 131.2 mph to break the superstock lap record.

Michael made it four wins from four starts by winning the second supersport TT race with a brilliant final lap speed of over 128 mph, a new lap record for the supersport class.

After his success at the Isle of Man TT, which saw Michael’s TT wins total go up now to seven, the next road race coming up for Michael was the Skerries road races. Michael went onto win both superbike races and finished a close second place in the supersport race.

This years Southern 100 would see Michael win both of the opening superbike races on the Honda TT legends racing superbike, in the Southern 100 solo championship Michael finished in second place although only 0.4 of a second behind Guy Martin.

At the Armoy road races Michael won both superbike races and broke the lap record in winning the grand final race. The Ulster Grand Prix proved to be a consistent one for Michael which saw race victory in the superstock race and finishing in second place in the feature superbike race. Plus Michael lapped at 133 mph making him the quickest rider at this year’s Ulster Grand Prix.

The rest of Michael’s 2013 road racing saw more race wins including at the newly formed classic TT races where Michael won the formula 1 race by over 45 seconds. Further wins followed at the Killalane road races including Michael winning the grand final race by 11 seconds. 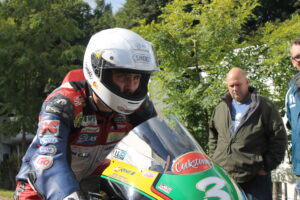 Final road race of the season for Michael was the Scarborough gold cup at Oliver’s Mount. Michael won the opening 250 race after a fabulous race with his brother William Dunlop. Michael produced a scintillating performance to win this years Steve Henshaw international gold cup.

Michael was victorious by over ten seconds over reigning gold cup winner Guy Martin. Michael’s gold cup win was a brilliant way to round off a memorable year of racing for him. It would be a shame to see Michael take a year out from road racing but this year the man has provided a brilliant years worth of entertainment, Michael is already at just 24 years of age regarded as one of the all time great road racers.