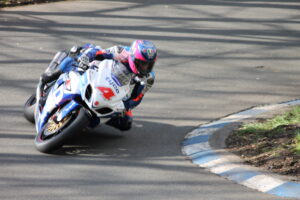 In windy but sunny and dry conditions the feature race for this years Ian Watson spring cup road races began with Guy Martin on the Tyco Suzuki by TAS superbike gaining a fine start to lead Lee Johnston, Dean Harrison and Ivan Lintin with the top four all in close proximity. Mid way through lap 1 and Martin spring cup victor in 2005 and last year was on a mission to start his 2014 road racing season in the best way possible.

By the end of lap 1 Martin lead Lee Johnston on the East Coast racing CBR 1000 Honda Fireblade with Dean Harrison and Ivan Lintin close together in third and fourth positions. Onto lap 2 and Ivan Lintin moved his way into third place in front of Dean Harrison whilst Guy Martin’s lead out front was now over a second over Lee Johnston. James Cowton was fifth maintaining a good pace on the SJP moto backed CBR 1000 Honda Fireblade, Seamus Elliott held a strong sixth place at the end lap of 1 on the D&G Wray racing backed R6 Yamaha and was also leading supersport 600 rider in the race.

As lap two finished Guy Martin lead out front grew whilst the battle for second place was hotting up as Ivan Lintin was close behind Lee Johnston with Dean Harrison in fourth place not to far behind. James Cowton still held fifth place in front of Seamus Elliott, James Coward and Daley Mathison who rounded out the top eight.

Lap three beckoned and Guy Martin lead went from strength to strength, hugely popular Guy lead out front was cheered on by many fans near Mere Hairpin. Plus at Mere Hairpin on lap three Ivan Lintin had moved into second place in front of Lee Johnston, the Taylor Lindsey racing rider competing on the ex Wilson Craig racing CBR 1000 Honda Fireblade superstock bike was producing one of the standout performances of the day.

Dean Harrison was still in fourth place position but close behind Johnston for third place, James Cowton and Seamus Elliott maintained fifth and sixth places in front of James Coward and Daley Mathison still holding seventh and eighth position. Making his debut at Oliver’s Mount today has being Gareth Keys, Gareth competing on a S1000RR BMW was proving his ability as a rider who quickly adapts to new road race circuits that he competes at, as of lap three Gareth held a top 15 position.

Onto lap four and Guy Martin still lead by a healthy margin but Ivan Lintin now in second place was now coming under pressure from Dean Harrison now third in front of Lee Johnston. The runner up in the 2013 Duke road race championship Dean was producing another eye catching ride with spectacular riding throughout. James Cowton continued to impress holding fifth position riding a calm and collected race whilst being not to far off the pace of top four during the race. 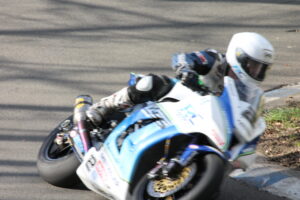 Lap four ended with positions out front remaining the same. Lap five saw no major changes throughout the field but Harrison was reeling in Lintin for second, both Dean and Ivan where giving it everything as they both battled over second place. Lee Johnston was still fourth and was proving that despite this years spring cup being only his second time at Oliver’s Mount Lee has already become an established front runner at the iconic road race circuit.

There was an inevitably factor on lap six that with two laps to go that Guy Martin was set to win his third spring cup. Guy who is still chasing an elusive first TT win this year was putting in the perfect preparation ahead of TT 2014 by dominating the feature spring cup race. Ivan Lintin and Dean Harrison’s battle continued the gap now down to 0.3 of a second, RC Express racing Kawasaki rider Dean could sense second place was up for grabs whilst Lee Johnston, James Cowton and Seamus Elliott completed the top six.

Lap seven and Guy Martin was one lap away from spring cup victory but a story was developing behind with Lintin and Harrison still close together but Ivan reigning Ulster Grand Prix super twins winner was in determined mood pulling a slightly bigger gap over Dean as both entered the final lap of the race.

Despite his big lead out front Guy Martin never once backed off his pace and at the line the eight time Scarborough gold cup winner won the spring cup for the third time. Ivan Lintin managed to hold off Dean Harrison for second after a brilliant battle between them which was fought very fairly and cleanly.

Lee Johnston crossed the line in fourth place on the East Coast racing CBR 1000 Honda Fireblade backed by Miles Kingsport. James Cowton finished fifth a good ride for James who is set to be one to watch at this years Isle of Man TT. Producing an excellent ride in sixth was Seamus Elliott who finished in front of James Coward who recorded a top seventh place finish. Daley Mathison on the Hol Taj/Team classic Suzuki supersport bike rounded out the top eight finishers. 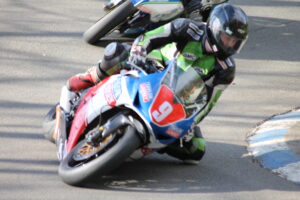 So a top race throughout which featured top rides from in particular Ivan Lintin who finished a fine second on Taylor Lindsey racing CBR 1000 Honda Fireblade, Seamus Elliott leading supersport 600 rider who rode a superb race on the D&G Wray racing backed R6 Yamaha and Lee Johnston who has adapted so quickly to Oliver’s Mount. But performance of the race came from Guy Martin who dominated throughout and looks in top form ahead of North West 200 and Isle of Man TT where Guy is still looking for a first TT win, on the form today from him who’s to say this won’t happen this year.