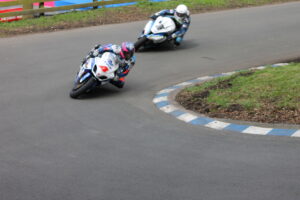 The opening race at this years Ian Watson spring cup road races was the superbike A race and in pole position was Guy Martin. Tyco Suzuki by TAS rider Guy was in good form in practice and qualifying, could he repeat this form in the race, we would all know soon. Lee Johnston made the best start on the East Coast racing CBR 1000 Honda Fireblade grabbing the holeshot into Mere Hairpin on lap 1 and was closely followed by Ivan Lintin, Dean Harrison, Guy Martin and James Cowton.

Known to many as general Lee the rising road racing star lead at the end of lap 1 by a decent margin whilst Guy Martin had moved into second place, Ivan Lintin held third place, Dean Harrison was fourth, James Cowton fifth and James Coward rounded out the top six. Lap two saw Johnston continue to lead but Guy Martin was closing fast having moved into second place, Ivan Lintin maintained third place but Dean Harrison was not far away in fourth place on the RC Express racing Kawasaki superbike.

Soon on lap three Martin hit the front, Johnston despite riding superbly was now behind the reigning Ian Watson spring cup road races winner. Dean Harrison and Ivan Lintin where close together in the battle for third place whilst James Cowton was holding fifth place on the SJP moto backed CBR 1000 Honda Fireblade.

At the end of lap three Guy Martin had broken away from the chasing pack now holding a good advantage over Lee Johnston in second place with Dean Harrison now moving into third in front of Ivan Lintin. Davy Morgan was holding a top ten position on the CMS racing Honda Fireblade as lap four saw more action up front.

Martin still lead but Johnston was now under pressure from a on form Dean Harrison, Darran Lindsay trophy winner at last years Scarborough gold cup Dean proved once again his natural ability around Oliver’s Mount. Soon on lap five Harrison was in front of Johnston, Guy Martin still maintained a good lead on the Tyco Suzuki by TAS superbike, amongst the riders producing good rides throughout the race included James Coward on the Horizon Distribution CBR 1000 Honda Fireblade, James was holding a good sixth place as of lap five.

As lap five closed positions out front remained the same. Onto lap six and Guy Martin’s supporters where cheering a plenty as the road racing star continued to lead out front as Dean Harrison, Lee Johnston and Ivan Lintin all remained in second, third and fourth positions. James Cowton was still fifth but keeping a good race pace throughout, James Coward held sixth place in front of Mick Goodings and Davy Morgan who finalised the top eight.

Laps six and seven saw very little movement in terms of positions in the top eight. Guy Martin’s record around Oliver’s Mount is simply stunning and another top win around the mount looked set to be soon added to Guy’s collection as the Tyco Suzuki by TAS rider crossed the line at the end of lap seven with a commanding lead out front.

Dean Harrison still held second place and was thoroughly entertaining the large crowds around Oliver’s Mount producing a mix of stylish and spectacular to watch riding on the RC Express racing Kawasaki superbike. Guy Martin took the chequered flag on the final lap of the race to record another brilliant win around Oliver’s Mount.

Guy was delighted with race victory in superbike A race which provided the perfect start to his 2014 season. Second place finisher was Dean Harrison who also enjoyed a good start to the season, Lee Johnston finished in third place to prove that the top three finish on his debut Oliver’s Mount at the Scarborough gold cup in the supersport 600 race was no fluke. Ivan Lintin, James Cowton, James Coward, Mick Goodings, Davy Morgan, Mark Goodings and David Hewson rounded out the top ten.

Superbike races around Oliver’s Mount are always great to watch and this race was no different, Guy Martin has always being a one off around the mount, ever since he made his debut at the road race circuit known as the mini TT in 2002 he has seemed at home on it and today was no different.