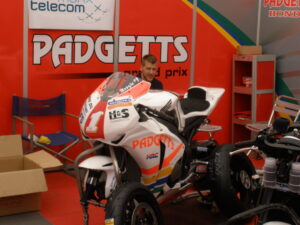 With near enough perfect conditions all around the TT course, the superstock TT race for 2009 saw at Glen Helen on lap 1 John Mcguinness take a slight lead over his Padgetts racing team Ian Hutchinson.

Guy Martin held third place in front of Keith Amor and Steve Plater who competed the top five. As lap 1 went on the top 5 in the race where all in close proximity.

Lap 2 began with Hutchinson and Martin continuing their duel, the battle for the lead had the whole crowd engrossed in a race quickly becoming a classic. As the riders entered the pits at the end of lap 2 Ian Hutchinson held a narrow advantage over Guy Martin in second place.

Keith Amor was now into third place in front of John Mcguinness and Steve Plater. The pit stops created drama as Guy Martin had a excellent pit stop which gave him at the end of lap 2 a eight second lead over Ian Hutchinson now in second place.

By the end of lap three Guy Martin had around a two second lead over Ian Hutchinson in second place, the stage was set for a dramatic final lap in what was proving to be one of the best superstock races seen at the Isle of Man TT.

The final lap of the race saw Ian Hutchinson continuing to take more seconds out of Guy Martin’s lead, mid way through the final lap saw Hutchinson make a decisive move as he took the lead of the race and began to break away from Martin in second place.

Positions remained the same as lap 4 went on and at the finish Ian Hutchinson crossed the line to win the 2009 superstock TT race. Guy Martin finished in second place eight seconds down on Ian Hutchinson, Keith Amor finished in a good third place on the Wilson Craig racing CBR 1000 Honda Fireblade superstock bike.

Steve Plater, John Mcguinness, Conor Cummins, Gary Johnson, Carl Rennie, Dan Stewart and Dan Kneen completed the top ten.  A truly memorable race which saw Ian Hutchinson on the final lap of the race set a new lap record for the superstock class with a lap speed of over 129 mph.