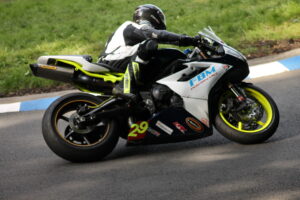 Rising star Tom Weeden is all set for the 2014 road racing season. Tom this year made his Manx grand prix debut and in the newcomers A race when competing on a 675 Daytona Triumph achieved a top 20 finish. Arguably Tom’s best performance this year came in the second superbike race at this years Scarborough gold cup. Tom rode superbly to record an incredible second place finish, in the second super twin race at this years gold cup Tom made it two top three finishes in a day by finishing in third place.

Looking to 2014 and Tom is competing at the Ian Watson spring cup road races, cock of the north road races and Scarborough gold cup at Oliver’s Mount, Tom is aiming to return to the Manx Grand Prix in 2014 and potentially could be making his North West 200 debut. Tom Weeden impressed many this year at the Scarborough gold cup producing an eye catching performance in the second superbike race which proved Tom is a fast rising star in road racing.