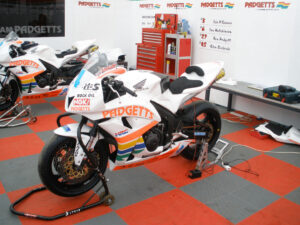 With good conditions all round the opening supersport race of TT 2010 began with Guy Martin taking a early lead at Glen Helen on lap 1.  Ian Hutchinson held second place whilst Dan Kneen moved into a superb third place.

Lap 2 began with Guy Martin retaking the lead but soon Ian Hutchinson was back in front. The battle for race victory between Martin and Hutchinson had everyone engrossed.

As lap 2 ended Ian Hutchinson was pulling away slightly, now with a two second lead over Guy Martin. Dan Kneen, Michael Dunlop and Keith Amor where all in close proximity in the battle for third place whilst William Dunlop was maintaining a good top six position.

As the riders left the pitlane to begin lap three Ian Hutchinson still had a lead of around two seconds over Guy Martin in second place. Michael Dunlop was now into third place and was on a charge on the Street sweep backed R6 Yamaha.

Lap 3 saw positions out front remain largely the same with Hutchinson still maintaining a lead now over three seconds over Martin in second place. So the final lap of the race began with Ian Hutchinson looking to make it two wins in a week at this years Isle of Man TT and Guy Martin looking for that elusive first TT win.

At Ramsey on lap four the lead for Ian Hutchinson was four seconds but as the riders went over the mountain Guy Martin had reduced Ian Hutchinson’s lead to three seconds, the stage was set for a grandstand finish.

The final gap between Ian and Guy was 3.03 seconds. Michael Dunlop finished in third place 14 seconds down on Ian Hutchinson whilst Keith Amor finished in fourth place. Dan Kneen recorded a personal best finish of 5th place as did William Dunlop who rounded out the top six.

The opening supersport TT race of 2010 was another race which showed that Ian Hutchinson is one of the best road racers of all time.