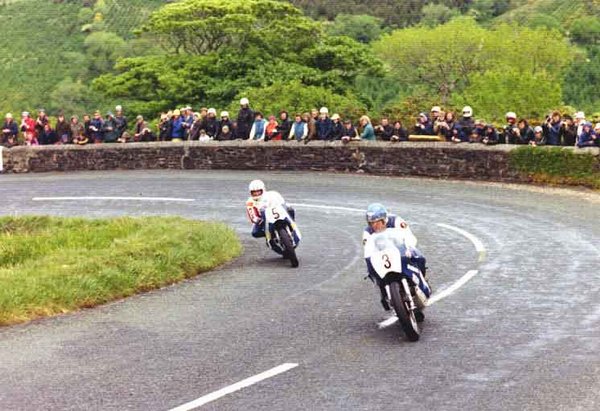 Throughout the 30 plus years of roads circuits holding Moto GP competition, a who’s who of motorcycle racing legends have starred at many of pure road racing’s most respected, famous and historic venues.

This includes of course greats such as Giacomo Agostini and Mike Hailwood, who between them have equally 24 World Championship and TT triumph’s.

In the 60’s and throughout the 70’s Agostini and Hailwood’s achievements in particular at the TT Races, increased the publicity of motorcycle racing worldwide, their battle for Senior race honours in 1966 is regarded by many as one of the greatest races in TT history. 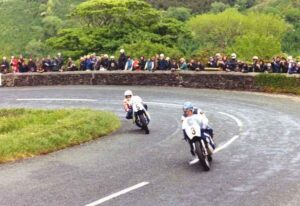 Prior to the 60’s and 70’s, the 50’s saw iconic riders in the realm of John Surtees and Geoff Duke become the first riders of pretty much superstar status.

Outside of their well known Mountain Course achievements, they also enjoyed consistent success at venues such as Dundrod home of the Ulster Grand Prix, the original Spa Francorchamps circuit and in France at courses like Reims Gueux and Circuit De Charade.

In between the legendary British duos tumultuous feats, we must not forget as well the achievements of competitors like Bob McIntyre, who clocked the first 100 mph lap of the Mountain Course.

Moving onto the 1980’s, the last three years roads circuits played a role in Moto GP competition showcased in full the talents of more overseas greats.

Overall when looking back on world championship roads action over the course of four decades, you can’t help but admire the skill and bravery of the riders who all proved themselves as roads warriors.

There are those who perhaps criticise some of the champions of yesteryear, due to their continued vitriol of roads circuits place within Grand Prix racing.

What you can’t criticise though is the undoubted talent and ability of the race winners and podium finishers, in an era which many regard as the ‘Good Old Days’ of motorcycle racing.

Part three of pure road racing’s Moto GP connection will focus upon the manufacturers that helped propel the likes of Agostini, Hailwood, Read, Sheene, Surtees, Duke and many others to World Championship success.