Home - Isle of Man - 2018 Manx Motorcycle Club Dinner Round Up 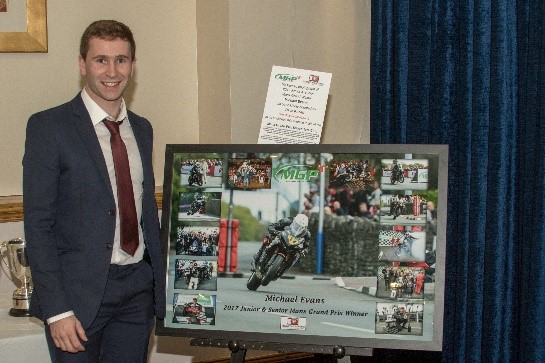 The annual dinner of the Manx Motor Cycle Club, which took place at the Palace Hotel in Douglas last Friday night, provided an evening full of laughs, light hearted banter, updates from prospective TT 2018 participants and important news in relation to the future of the Manx Grand Prix.

The evening was compered by resident travelling event marshal Jim Hunter, and before eating there was a short speech and report made by outgoing chairman of the MMCC Harvey Garton.

Who reported that the number of applications for the 2017 Manx Grand Prix was up on previous years, and though they had to disappoint many by rejecting their applications, their decision was ratified by the outstanding quality of the racing.

Though he did have to mention that next year the newcomers would be told exactly what would be expected by them, prior to them being allowed out on the course.

This follows some what could be described as reckless riding, by some newcomers in the first practice session at the 2017 event. 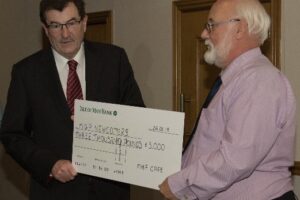 After six years as Manx Motor Cycle Club Chairman Mr Garton is standing down, the new man taking on the chairman role is Peter Maddocks, whose first duty was to accept a check from Adrian Earnshaw for £3,000 pounds to help future prospective Manx GP newcomers.

Additional highlights of the evening include Dave Kneen of Manx Photos Online donating a superb framed montage print of Michael Evans, which was auctioned off. 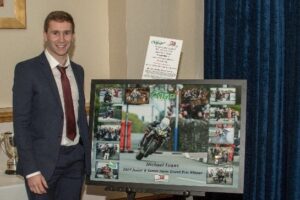 After some hectic bidding it finally went for £160. There was also a collection which raised a further £775 pounds, giving a total of £935 pounds toward the MMCC Benevolent Fund.