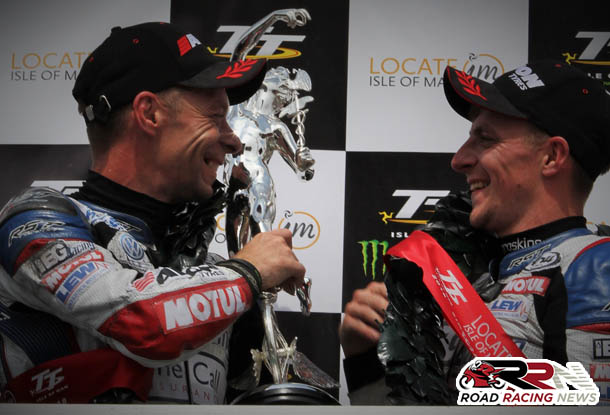 After their record breaking exploits in the opening Locate.im Sidecar race, many were predicting that the Birchall brothers Ben & Tom would make it today four successive three wheeling Mountain Course glories. Would this prove the case?

In fantastic conditions on lap 1 at Glen Helen Silicone Engineering Racing’s John Holden/Lee Cain surged into an early lead, heading lap record holders the Birchall brothers by 1.44 seconds, whilst the Carl Cox Motorsport duo of Tim Reeves/Mark Wilkes were only a further 0.77 behind.

Holden/Cain maintained a 1.4 second plus advantage at Ballaugh Bridge and Ramsey Hairpin, but by the Bungalow the IEG backed Birchalls took the lead, moving 0.7 clear of Holden/Cain.

Over the mountain, the Mansfield pair extended their lead to over two seconds, come the completion of lap 1 they held a slightly reduced advantage of 1.8 seconds, as early pace setters Holden/Cain firmly kept in touch.

Now into the lead after by their standards a steady start, the Birchalls well and truly got the hammer down on lap 2, pulling nine seconds clear of Holden/Cain by Ramsey Hairpin, which extended to 12.2 seconds at the Bungalow. 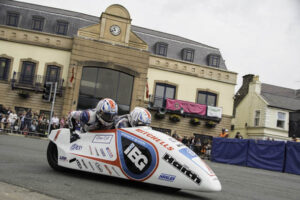 It was obvious that the history making crew were on to beat their existing lap record, but could they dip under the 19 minute mark, and bank the first 119 mph lap in Sidecar TT history.

They could and some as at the finalisation of lap 2, they crossed the start line to lap at an average speed of 119.25 mph, a quite incredible bit of motorsport brilliance from the quietly always ultra determined Birchall brothers. 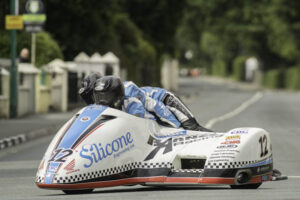 Given the record breaking, historic pace of the leaders, John Holden/Lee Cain despite lapping at a new personal best lap speed of 117.878 mph, were now 15 seconds down on their fellow vastly decorated counterparts.

Reeves/Wilkes who also blitzed their previous PB lap speed, lapping at 117.729 mph, were just over seven seconds behind Holden/Cain.

Following their incredible, tumultuous, record breaking previous lap, the third and final lap of a quite historic race would see the Birchall brothers keep up a relentless, rapid pace to ultimately emerge victorious by 22.92 seconds.

Now eight times TT winners, with a 50 percent race winning rate, it’s fair to say that we have to now regard Ben Birchall/Tom Birchall as being strongly amongst the greatest Sidecar TT teams of all time. 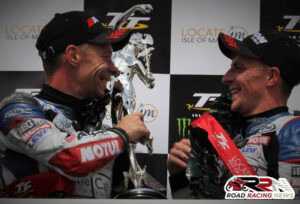 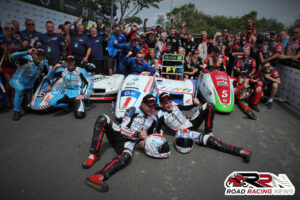 Race runner up’s John Holden/Lee Cain, were extremely magnanimous in defeat, as they finished for the fourth successive Sidecar TT encounter, second behind the Birchalls.

Rounding out the first ten finishers were the Ramsden’s Steve & Matty, Estelle Leblond/Melanie Farnier and the Beverley based father/son Gibson’s team.

You couldn’t but not be impressed as well with the exploits of leading newcomers Michael Jackson/Harry Payne, finishing a very respectable 12th.