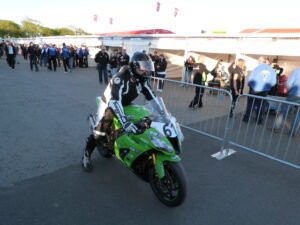 Many a rider from France is competing at TT 2014. Fabrice Miguet is a highly experienced rider who has achieved top 30 finishes at the Isle of Man TT and is competing this year on a ZX10 Kawasaki in the superbike, superstock and senior TT races. Timothee Monot at TT 2013 recorded his personal best finish at the Isle of Man TT which was acquiring a 27th place finish in lightweight TT race when competing on a ER6 Kawasaki. Timothee for this years TT is competing on a CBR 600 Honda in the supersport races for the Optimark road racing team, whilst for the lightweight TT Timothee is Kawasaki mounted.

Xavier Denis is competing in the Isle of Man TT for the first time this year in superbike, supersport, superstock and senior TT races. Xavier made his Manx Grand Prix debut in 2013 recording a top 20 finish in the newcomers A race and loves going road racing. Franck Petricola is making his TT debut on a ZX10 Kawasaki for ice Valley racing by Motorsave ltd. Franck in 2013 finished 11th overall in the International road racing championship and is greatly looking forward to making his TT debut.