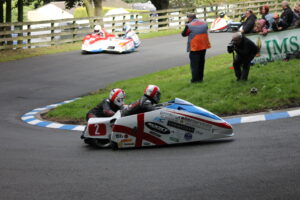 Sidecar road racing star is looking forward to this years road racing season. Conrad and passenger Mike Aylott in 2013 achieved a brilliant 2nd place finish in the opening sidecar TT race edging out TT legend Dave Molyneux into third place. Conrad went onto to finish in third place in the second race, overall TT 2013 was a superb one for Conrad. The Southern 100 would see 3rd and 5th place finishes in both sidecar races, whilst the Scarborough gold cup was a highly consistent one for Conrad who recorded three second place finishes on the Printing roller services backed outfit.

For 2014 Conrad is back at Oliver’s Mount where Conrad has achieved multiple wins and has won many a exciting race plus Conrad is back at Southern 100 and is competing in the sidecar TT races. Conrad is aiming to go one better than second place in the sidecar TT races this year, a podium finisher many times at the Isle of Man TT a debut TT victory could be on the cards for Conrad this year.