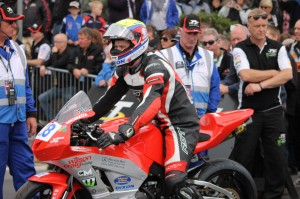 Jamie Hamilton produced many top performances during TT 2014. Jamie competing for Wilson Craig racing encountered reliability issues in both superbike and senior TT races but a positive was a personal best lap speed of over 125 mph.

Second supersport race would prove a highly competitive one for Jamie who matched his personal best result in a supersport TT race with 12th place finish.

Bike nation lightweight TT saw Jamie Kawasaki mounted competing for Stewart Smith racing, a superb fifth place finish was recorded in a race which saw the talented road racer not far off a podium finish throughout. In all TT 2014 was challenging for Jamie Hamilton but there was lots of positives for him from this years Isle of Man TT.