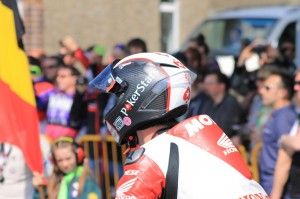 Conor Cummins was back on form during TT 2014 in the big bike races. This years Isle of Man TT saw the two metre man competing for the factory Honda racing team.

Although reliability issues struck the Jackson racing CBR 600 Honda in both Monster energy supersport races Conor showed quick pace throughout carrying on his form from North West 200 where he was runner up in second supersport event.

The Pokerstars senior TT would see Conor make a excellent start on Honda racing superbike quickly battling for the lead of the race with William Dunlop, Michael Dunlop and Guy Martin.

By pit stops at end of lap two the Ramsey rocket had moved into second place as he began to build up his challenge for his first victory on the mountain course. Although Conor couldn’t reel in Michael Dunlop for race victory it was a fine performance as he secured second place finish. 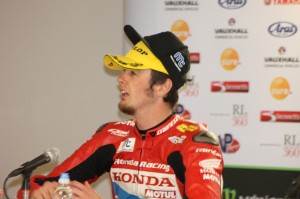 Which rounded off a good TT for a rider who has worked so hard to get back in the top echelon of road racing, next road race coming up for Conor is set to be the Ulster Grand Prix where he has a good record which includes feature superbike race victory in 2009.