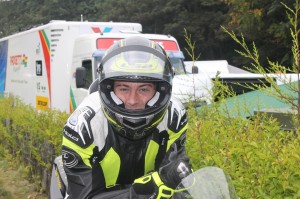 Second senior b race would see Tom produce one of the best performances so far during his road racing career. Starting from 14th on the grid he charged his way through to third place by lap six, on the final lap the rider who thoroughly enjoys competing around Oliver’s Mount had gone into race lead. 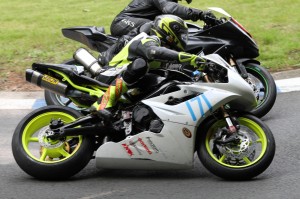 By the end of the final lap Tom had clinched a quite remarkable race victory, his first around the mount. Next on the horizon for the rider who secured 32nd place finish in this years junior Manx Grand Prix was David Jefferies trophy race 2.

Another fine all round performance was produced by him with highly creditable sixth place finish acquired and been leading Triumph mounted rider home. Next up was feature race of the weekend the Steve Henshaw international gold cup.

Rounding off his 2014 road racing season in style Tom secured seventh place finish plus was second 600 mounted rider home in the race. Despite two crashes in a day on day one of action at this years Scarborough gold cup Tom Weeden battled his way back to competition and was rewarded with a debut victory around one of the most famous road race circuits in the world Oliver’s Mount.

Martin Harrison – Closer To The Hedge