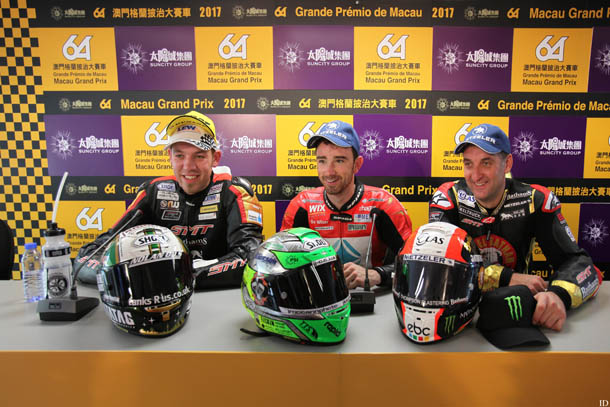 Following the scintillating action from the second qualifying session, just some of the most interesting bits of news emerging from the Macau GP paddock includes will Metzeler return to the top step of the podium in front of fellow tyre giant Dunlop?

Will this prove the case again with pre race favourite for Saturday’s 12 lap encounter, Glenn Irwin?

Unbeatable this week in practice and qualifying, in my opinion the only aspect that could stop the Be Wiser Ducati racer from claiming a second international roads crown, will be whether the Metzeler’s can maintain their durability at the anticipated blistering pace he will set from the beginning of the upcoming 12 lap race. 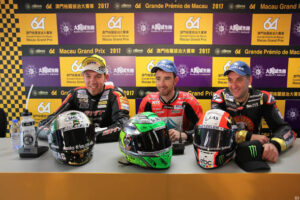 Outside of the newly Tak Chun Group backed Irwin vs Hickman, Metzerler vs Dunlop battle, Penz 13 BMW have added a few nice touches to their trio of S1000RR’s running on them get well soon messages to Ian Hutchinson, John McGuinness and Stephen Thompson.

Dafabet Devitt Racing’s Ivan Lintin overall 16th quickest in qualifying, performances have been made all the more impressive by the fact that he’s piloting this week his customary Superstock Kawasaki against a 28 rider entry filled with high level Superbikes.

As predicted by many, BMW have a lengthy presence within the sharp end of the qualifying leader board, with five of the ten fastest qualifiers BMW Motorrad mounted.

Eighth quickest on the time sheets Horst Saiger, is rumoured to be moving away from 1000cc Kawasaki machinery in 2018.

Whilst added following season news emerging from Macau, includes the possibility of Cookstown BE Racing running a two rider team.