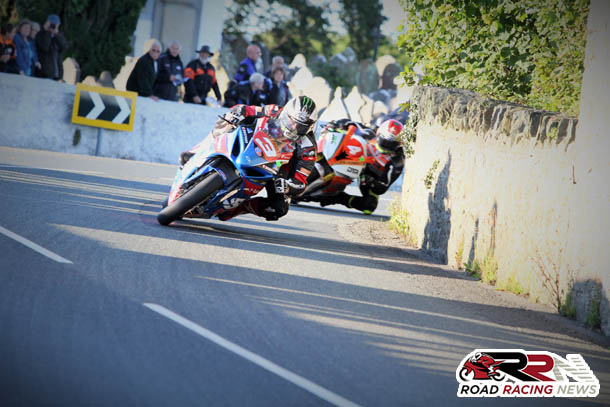 Extracting the maximum out of the new GSX-R 1000, Michael Dunlop provided the marques new model with a maiden Southern 100 success around Billown, in a tight, close fought 600/1000 race.

In a race long duel with DTR’s Dan Kneen, there was nothing in it throughout between the Ballymoney and Braddan based riders.

Manxman Kneen in great form, following Open race honours at Imatranajo in Finland, was looking on course for a first big bike title at Billown, going into the penultimate lap of the race.

Lap six though would see Dunlop charge back to the front, pulling out a lead of around half a second over the 2014 Irish road race Superbike champion. 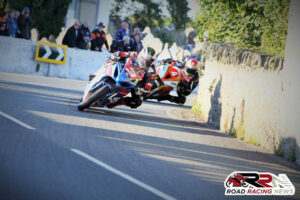 This would prove pivotal, as on the final lap his lead gradually step by step was been reduced by a determined Kneen, who although ultimately finishing in second place, had the distinction of setting a new race lap record of 114.185 mph.

The gap at the line between the Suzuki and BMW Motorrad backed riders, stood at just 0.159.

Race winner Dunlop, said in the winners enclosure that he was a bit “rusty”, having not raced since his momentous Pokerstars Senior TT success.

A philosophical Kneen, was happy enough with second, whilst Silicone Engineering Racing’s Dean Harrison in third place stated that a bad start slightly hampered his bid to run with the pace setters.

Radcliffe’s Racing’s Jamie Coward sealed an impressive fourth place, in front of the closely matched Ivan Lintin and James Cowton, as Rob Hodson in seventh also impressed on his own teams BMW.

Accumulating the final spots within the top ten, where Mark Goodings, Michael Russell and Anthony Redmond.

Looking back overall a top class opening race of the 2017 Southern 100, you have to draw some notable conclusions.

One is the new GSX-R 1000 Suzuki, is a top class machine but is still improving. In my opinion at present what’s making the difference for Suzuki’s success roads wise, is one factor overall, the mounts pilot, 15 times TT winner Michael Dunlop.

I state this cause from watching at Church Bends last evening, it was evident to me that Dan Kneen and the DTR BMW looked the better package in terms of outright pace. 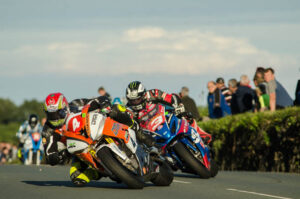 With this in mind the Manxman will be confident of securing the Senior race title this evening, with another gripping battle in prospect against the already iconic combination of Bennetts Suzuki and Michael Dunlop.