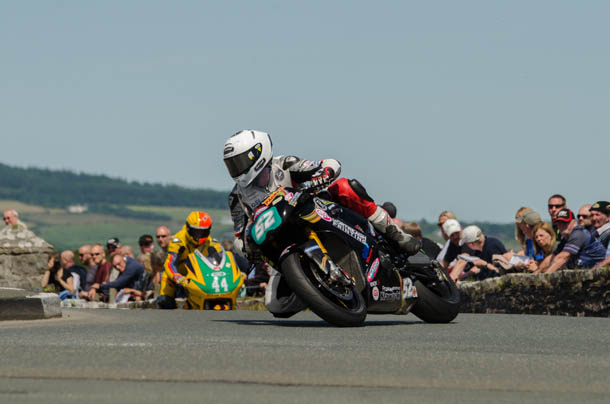 2014 Duke Road Race Rankings champion James Cowton began a new super twins challenge, at the 2016 Southern 100, as he competed for the first time, on the Mcadoo Racing/Gortreagh Printing ER6 Kawasaki.

It’s fair to say prior to this week, many including me where expecting James to be in action on the Cowton Racing by Radcliffe’s ER6 Kawasaki.

So when it was confirmed that he would be piloting the Mcadoo Racing/Gortreagh Printing ER6 Kawasaki, it was a pleasant surprise to many.

The second super twins race, would see as in the opening encounter Ivan Lintin in dominant form, whilst for James it would provide the main highlight of his 2016 Southern 100, as he finished in second place.

He confirmed yesterday that he would be piloting the machine piloted in recent years by Michael Dunlop, at the upcoming Armoy Road Races and the world’s fastest road race, the Ulster Grand Prix.

Added highlights from action at Billown included third place finish in the S&S Motors supersport race, plus finishing leading supersport runner in the 600/1000 race on the Cowton Racing by Radcliffe’s CBR 600 Honda.

Next weekend sees James compete at the Barry Sheene Festival Powered by Suzuki at Oliver’s Mount, as he aims for more first class results.