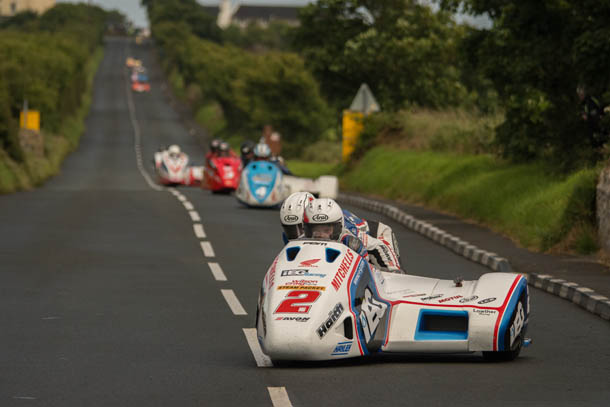 Nearest challenger to Thomas was Dave Quine 2.132 seconds behind, who is set to in August, make his Manx Grand Prix debut.

Just like last night’s super twins race, Ivan Lintin was once again in blistering form on the Devitt RC Express Racing ER6 Kawasaki, as he made it a super twins double at the 2016 Southern 100.

Finishing almost nine seconds clear, Ivan it’s fair to say is the dominant force on 650 machinery, at present on the roads. 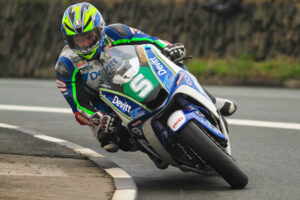 Rhys Hardisty was again mixing it with the 650’s on his RS250 Honda in fourth, Jamie Coward finished fifth whilst Billown newcomer Adam McLean sixth once again impressed.

Completing the top ten on the leader board where Dean Osborne, Jonathan Perry, JHS Racing’s Dave Moffitt and Brad Vicars.

Seamus Elliott secured his third Southern 100 victory, with success in the second 125/400 race. 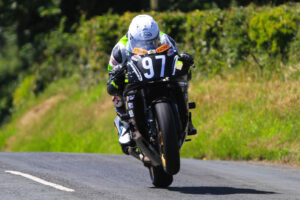 Seamus held off the challenge of race one winner Darryl Tweed, who has made a very, very impressive Billown debut.

No doubt about this years Southern 100 sidecar championship race was one of the best sidecar races, ever witnessed around Billown.

At the end of a quite gripping and momentous race it was Tim Reeves/Patrick Farrance who secured race victory, after passing long time race leaders Ben Birchall/Tom Birchall on the final lap. 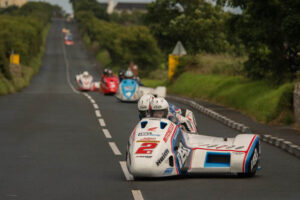 Finishing behind the Birchall brothers in third, where John Holden/Andrew Winkle in the Silicone Engineering/Barnes Racing backed outfit.

The top three finishers, all on the sixth lap, lapped in excess of 100 mph, a unique moment around Billown, the first 100 mph laps from sidecar outfits.

Brad Vicars underlined his status as one of the rising stars at the Southern 100, with senior support consolation race victory.

Piloting the AJB Racing CBR 600 Honda, he held off a determined challenge from Michael Evans, who is set to later in the year make his Manx Grand Prix debut.

Michael Dunlop made it four wins from four starts, during the 2016 Southern 100, with another dominant victory on the Hawk Racing S1000RR BMW, this time in the superbike race.

Emerging victorious by in excess of 19 seconds, the first rider to lap the Mountain Course under 17 minutes, has been in a league of his own this week.

With a number of high profile non starters which included Dean Harrison, Ivan Lintin and Dan Kneen, this represented the chance for many to stand on the podium.

Securing second place was Ryan Kneen on the Charmer Builders backed ZX10R Kawasaki, a great performance from a rider, who is established amongst the Isle of Man’s leading pure road racers.

Seamus Elliott was next up in fourth on his own teams ZX10R Kawasaki, he was followed by Mark Parrett, Rob Hodson, Mark Goodings, Frank Gallagher, Dominic Herbertson and Mick Goodings tenth, on the Motorcraft Conversions backed CBR 1000 Honda Fireblade.

Overall a quite brilliant 2016 Southern 100, it will be remembered for the great sidecar battles, up and coming stars moving up a level and the master classes from Michael Dunlop.