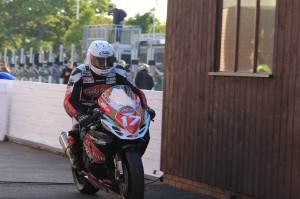 In a dramatic grand final race at Skerries Dan Kneen recorded a hard fought race victory on Cookstown Burrows engineering racing GSX-R 1000 Suzuki. Jamie Hamilton had lead throughout and was battling with Dan for grand final victory before slipping off on final lap, Jamie has by all accounts a shoulder injury, we wish the two time winner at 2014 Skerries road races all the best.

Shane Egan reigning senior support Irish road race champion was eighth in front of seasoned competitor Alan Connor and James Kelly who completed the top ten. So a exciting grand final race which saw Dan Kneen achieve another notable victory in what is turning out to be arguably the best season so far in his road racing career.