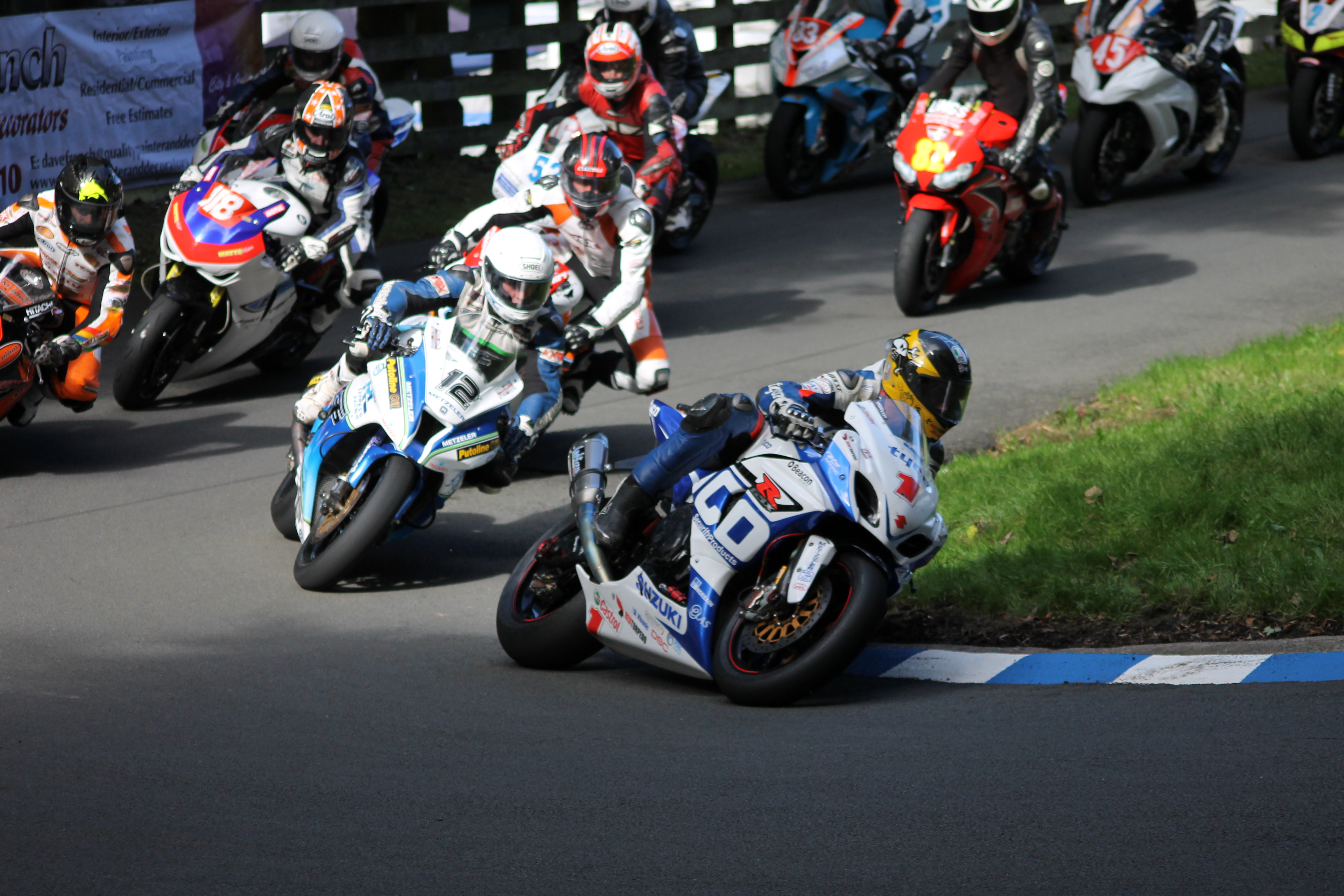 The first leg of this years Darran Lindsay trophy superbike race at this years Scarborough gold cup began with good conditions all around the Oliver’s Mount circuit. Guy Martin got the holeshot into Mere hairpin on lap 1 and lead Dean Harrison on the RC Express racing Kawasaki by MSS performance who was close behind Guy.

Guy Martin began to up the ante on lap 3 as Dean Harrison was giving it everything in pursuit of the eight times Scarborough gold cup winner. Michael Dunlop despite being in a static third place showed great pace, Lee Johnston was impressing many holding fourth place in the superbike race, given that this years Scarborough gold cup is Lee’s first time at Oliver’s Mount, his performance in the superbike as of lap 3 was fantastic.

Guy Martin crossed the line at the end of lap 3 and had broken now Dean Harrison’s previous lap record on lap 2, Guy set a lap time of 1 minute 44.2 seconds on the Tyco Suzuki by TAS superbike. Dean Harrison still held second place and was only under a second behind the race leader.

The race between Guy Martin and Dean Harrison out front captured the imagination of all the race fans around the Oliver’s Mount as the two at the top of their game battled it out for the lead on lap 4 of the race.

After both Guy Martin and Dean Harrison crossed the line the gap was now roughly over a second, but still all was to play for as the race went onto lap 5. Michael Dunlop still held third place but mechanical issues had struck for Lee Johnston who was forced to retire, this meant Bruce Anstey on the HM Plant Honda by Padgetts motorcycles CBR 1000 Honda Fireblade was now into fourth place.

Onto lap 5 and the leaders out front continued giving it everything, Guy Martin who won three races in a day at this years Ulster grand prix was carrying that form in the Darran Lindsay trophy superbike race, Guy was now pulling slightly away from Dean Harrison in second position.

So as lap 5 ended Guy Martin lead Dean Harrison by over a second with Michael Dunlop, Bruce Anstey and James Cowton completing the top 5.

Laps 6 and 7 during the race saw not to much movement around the top 5 in the race, although at the end of lap 7 Guy Martin had done it again, setting a new Oliver’s Mount lap record with a lap time of 1 minute 44.2 seconds.

Onto the final lap and with the gap now over 1.6 seconds Guy Martin had to just ride a consistent final lap to win another superbike race at Oliver’s Mount. Lap 8 finished with Guy Martin taking the chequered flag to win the opening leg of the Darran Lindsay superbike race.

Dean Harrison competing on the RC Express racing Kawasaki by MSS performance superbike finished in a superb second place and is now the second fastest ever rider around the Oliver’s Mount circuit.

Michael Dunlop produced one of his best rides around the Oliver’s Mount circuit to finish in third place in front of Bruce Anstey who finished in fourth position. James Cowton was the leading supersport 600 rider home finishing in a fantastic fifth place.

Daley Mathison produced a excellent ride on the Lincs lifting ltd backed GSX-R 1000 Suzuki to finish in sixth place whilst Keith Pringle and Brian Greenfield both put in top rides to finish in seventh and eighth places.