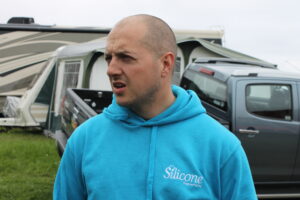 Russ Mountford is on top form at TT 2014. Russ competing for Silicone engineering racing set during Tuesday nights practice session his quickest lap speed in supersport 600 class lapping at 121.6 mph on 675 Daytona Triumph. Plus in superstock class Russ also set his personal best time this time on a ZX10 Kawasaki with lap speed of over 123 mph.

Silicone engineering racing have a fantastic set up in paddock at TT 2014 and Russ is enjoying working with the team as he bids for top results in superbike, superstock, supersport and senior TT races.

Alongside competing at this years Isle of Man TT Russ is also this year making his Macau Grand Prix debut. For Russ its something he has always wanted to achieve in his road racing career.

Before TT 2014 the rider nicknamed Monty has being doing a lot of endurance races which has helped greatly with preparation for this years TT where Russ is riding superbly. In all a great TT is in prospect of Russ Mountford who since making his Manx Grand Prix debut back in 2007 has got better and better around the mountain course.