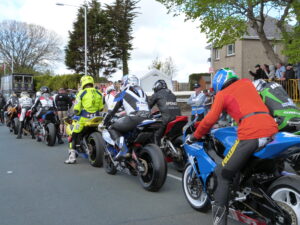 The Quelch Afterdark motorsport team are competing in road racing for the first time this year. Competing for the team at the North West 200, Isle of Man TT and Ulster Grand Prix are Karl Harris and Neil Gregory. Karl Harris made his TT debut back in 2012 achieving a top 25 finish in the superbike TT race, 2013 saw Karl record a personal best 16th place finish in the superstock TT race.

Neil Gregory made his Manx Grand Prix debut in 2013 and went onto achieve 9th place finish in the newcomers A race when competing on a 675 Daytona Triumph. Both Karl and Neil are talented riders who are competing this year on a variety of machinery which includes a Kawasaki, Honda and Triumph. Quelch Afterdark motorsport despite being newcomers to road racing look set to be a team to watch at the North West 200 and Ulster Grand Prix and at the Isle of Man TT.