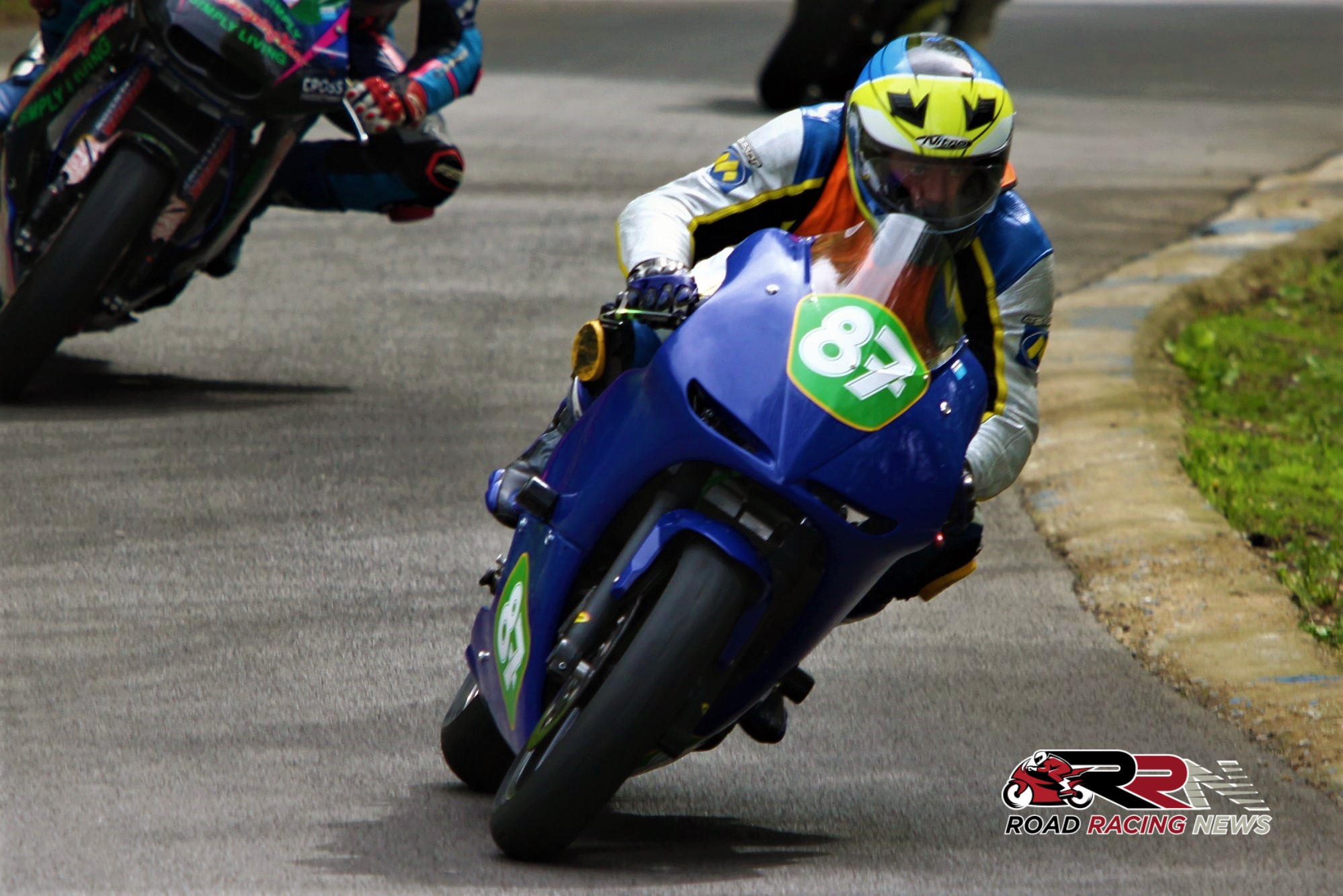 Next racer to feature in Road Racing News, new for this weekend one week on Oliver’s Mount Spring Cup series, is roads scene newcomer Paul Magnay.

Fulfilling a long held ambition of tackling a closed roads course, Magpie Racing’s Magnay gave a decent account of himself as he lap by lap built his confidence around the iconic Scarborough course.

Speaking via Facebook, the previous Croft Battle of Britain podium finisher commented in depth about his first taste of real roads action.

“This was my first ever road race and I have to say it makes track racing seem tame, you get a real sense of devilment riding flat out on an actual road.

The weekend didn’t go without any drama mind. On Saturday morning us newcomers were out first for 3 laps behind a pace bike, about 10 minutes before I headed on up we noticed my rain light wasn’t working so it was a mad dash to get the seat unit off and sort the wiring out.

Apologies to the team if I was a bit of a stressed out diva! So then I headed on up to the holding bay for our newcomer laps, I got there and we sat quite a while and I stupidly left the bike running.

So next thing it over heated and started to spew coolant out of the header bottle, at that very moment I thought my road racing career was over, luckily we sat there a bit longer, long enough for her to cool down so off we headed out on track.

Qualifying was really wet which suited me coz I always go well in the wet, and by some sort of miracle I qualified 8th out of 19 bikes.”

A top 15 finisher in the opening Super Twins heat, Magnay admits that his opening Scarborough stint, didn’t got entirely to plan.

“The first race didn’t go so well. By the time the first race started the track had dried up and the only dry tyres we had were a set of brand new Michelins, anyone who knows anything about racing would tell you only a **** **** would go out for his first ever road race on tyres that aren’t scrubbed in.

Yep! So the lights went out and we all set off, by the end of the first lap I was very last, it was like riding on jelly for a couple of laps by this time they had all cleared off, I managed to catch them back up again by the end but by that time it was all over and I’d finished my very first road race very last.

Gutted is an understatement, so after giving myself a kick up the arse I then spent all Saturday night beating myself up.”

Going onto reflect about the past Sunday’s competition which yielded a brace of top 12 finishes, from the Super Twin B races, the Z650 Kawasaki mounted racer stated the following:

“Sunday however was a totally different story the day set off fine then with 3 laps to go in the first race the heavens opened, I can tell you it was a bit hairy racing on a road with only trees and walls for run off in the wet on dry tyres.

But managed to make it home safe in 12th place with a lap time in the last lap equal to second place.
The second race (Super Twins B) I managed to get a good start and it was the most enjoyable race of my life taking the chequered flag in 7th position.”

Looking forward to venturing back to the Mount for next month’s Barry Sheene Classic, Magnay wishes to thank all of his sponsors, anyone who have helped him scratch that pure road racing itch.