In wet and damp conditions all round the opening superbike race for this years Vauxhall international North West 200 saw Ian Hutchinson make a lightning start on Milwaukee Yamaha superbike, Ian lead William Dunlop and Conor Cummins at the end of lap 1.

Soon after William Dunlop hit the front and began to break away from Hutchinson as Cummins battled with the seven time TT winner for second place. But gradually making his move behind was Michael Dunlop, factory BMW rider this year Michael was showing his lap record in qualifying was no fluke.

And by the end of lap four William Dunlop was being quickly reeled in by his brother, soon Michael and William where separated by nothing, the crowd at North West 200 was witnessing a classic duel between the Dunlop brothers. But which one would come out on top, we would all soon know.

Onto the coast road and Michael Dunlop took the lead but then with the final lap of the race coming to its completion William Dunlop produced a stunning manoeuvre over his brother to take the race lead and from there held on to take a famous victory. 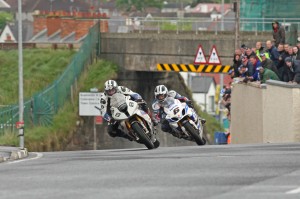 Michael Rutter finished in fourth place for Bathams BMW, fifth place finisher was Ian Hutchinson who gave it everything on Milwaukee Yamaha superbike and Simon Andrews was a good sixth on HP4 BMW ran by Penz 13.com BMW.

But the race belonged to William Dunlop who came of age to win his first international superbike race at North West 200.