Neil Lyons is aiming to keep up his rapid progress at the Manx Grand Prix in 2015. Neil who made his Manx Grand Prix debut back in 2013 secured top quality results at this years event.

Personal best finish on the mountain course was secured in junior race finishing in 11th position following a fine all round performance on Amigos backed R6 Yamaha. Senior race was next up and following another good performance 15th place finish was achieved as Neil finalised 2014 Manx Grand Prix in solid and consistent fashion. 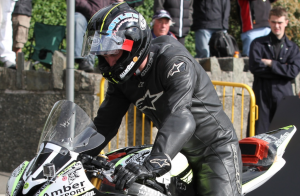 The main highlight of the 2014 road racing season for one of the most improved riders in road racing was winning the Irish road race senior support championship. In recent years the likes of Dean Harrison, Alan Bonner, Connor Behan, Derek Mcgee, Mark Hanna and Shane Egan have all emerged on the road racing scene following top results in the hugely competitive championship.

Neil Lyons is the latest rider to prove his undoubted talent as a top all round pure road racer from the senior support class. Neil is aiming in 2015 to make his debut at the worlds fastest road race the Ulster Grand Prix. He is greatly looking forward to competing on the road race circuit which has seen lap speed of nearly 134 mph achieved by Bruce Anstey in 2010 who lapped at 133.977 mph.

But the main feature of next season for the 2014 Irish road race senior support champion is competing for the third time at the Manx Grand Prix where he is set to be R6 Yamaha mounted. With a higher power output on the R6 Yamaha which he is competing on in 2015 expectations are good that standout results are more than possible for the rider who is improving all the time on the mountain course.

Conrad Harrison All Set For TT 2015