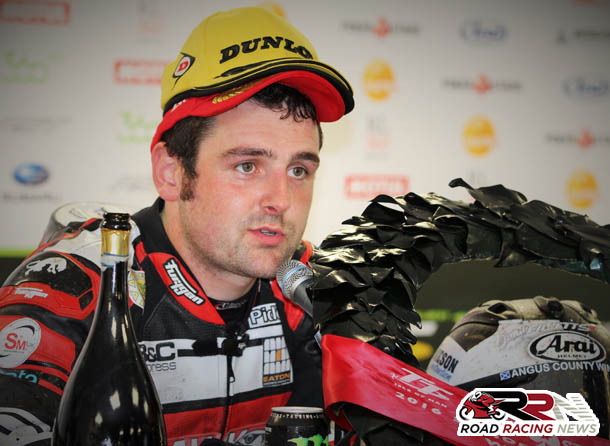 Even from the front cover of Michael Dunlop – Road Racer It’s In My Blood, there’s the sense of mystique of a unique individual.

The bright red writing of road racer, brings words into my mind such as respect, determination, drive, desire, ambition, will to win, all these terms you can associate with the 13 times TT winner.

From this book, we learn more about the man away from racing. How he first decided to take up racing, plus many an entertaining tale in his teenage years with his brothers William and Daniel, most of all though, you gain just how much his father Robert Dunlop, means to him.

His dad, a five times TT winner and 15 times North West 200 champion, is Michael’s hero, his inspiration. We all know the story of the 2008 North West 200, which saw him secure a maiden victory around the Triangle in an emotional 250 race.

Michael states in his autobiography, that he feels it is this race, that changed the course of his pure road racing career.

The Mountain Course lap record holder also states in his book, his views on topics such as his time with Honda Racing, his respect for fellow racers such as Guy Martin and aims for the future. 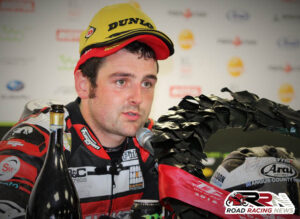 The tense rivalry with Ian Hutchinson at TT 2016, is also highlighted. Lots of people may feel they know the full story cut and dry on what unfolded last year, believe me your views could change, when you read this publication.

In my opinion what I gain most of all from this book, is that for all how many portray Michael Dunlop as been controversy prone, what they don’t realise is that pretty much all the time, when he gets involved in a notorious topic, he has not been the instigator, more rattled or pushed.

With this in mind, his autobiography, changes your opinion of him. Yes we know he’s got a maverick nature about him, but he’s also a brutally honest individual, not afraid to admit mistakes.

For up and coming road racers, this book, will act in my opinion as a great source of inspiration. In that if you have the talent, if you have a goal, if you want it enough, you will make it to the top.

Gripping, undistilled, raw, gritty, uncompromising, pure and most of all honest, reading through Road Racer, It’s In My Blood, is a thrilling journey.