It’s been a great two weeks of pure road racing action on the Mountain Course, at the 2016 Manx Grand Prix.

Alongside Tom Weeden’s brilliant last lap success in today’s thrilling Senior race, additional highlights of the meeting have included wins for Michael Evans and Paul Van Der Heiden in the Newcomers B races.

Added feats exclusive to the Manx GP include having the only Asian competitor on the Mountain Course in 2016, which is Masayuki Yamanaka, who secured series of 26th place finishes in the Junior and Senior races. 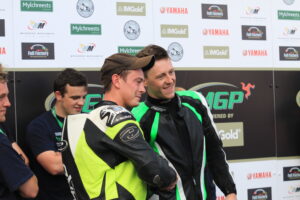 Plus the closest finishes on the Mountain Course during the Isle of Man Festival of Motorcycling, where in the Junior and Senior encounters, which saw top class battles for race wins between Andy Dudgeon and Tom Weeden.

The Lightweight Manx GP, saw for the first time a Moto 3 Honda, compete on the most famous road racing circuit in the world, as Dan Sayle piloting the Falcon Racing NSF250R Moto 3 Honda dominated the four lap race, to secure race victory.

Oilee Racing’s GSX-R 600 Suzuki mounted Joe Akroyd has without a doubt been one of the standout competitors, third place finisher in both the Junior and Senior races lapped close today to the 120 mph mark, following lap speed of 119.792 mph.

This year’s crop of Manx GP newcomers has been amongst the strongest in recent years. Some of the most impressive have included Wayne Humble, Julian Trummer, Jamie Williams, Paul Williams, Callum Ward, Brendan Fargher, Marc Ironside, Jonathan Perry and Dan Ingham.

In summing up the 2016 Manx Grand Prix, it’s been enthralling, gripping, momentous and most of all the racing has been good honest racing with no unsporting actions by the leading competitors, unlike what we saw in the meeting prior to race week at the Manx.