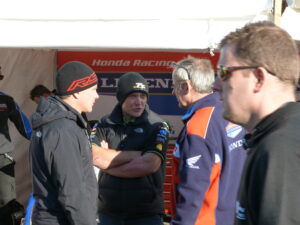 Keith Amor is back competing in the supersport TT races having confirmed his entry into this years races. Keith is competing for Site Sealants B&W racing on a CBR 600RR Honda, the team is run by former mechanic to Keith at the Isle of Man TT, Brian Hull. Keith has a fantastic record in the supersport TT races which includes podium finishes in the class in 2008,2009,2010 and 2011.

The 2011 opening supersport TT race saw Keith achieve a personal best TT finish of second place finishing under ten seconds behind race winner Bruce Anstey. Keith has also being a winner in the supersport class at the Ulster Grand Prix having won the second 600 race back in 2010. Keith’s return to action in this years supersport TT races adds another exciting prospect for what is already looking like being ultra competitive supersport races at TT 2014.