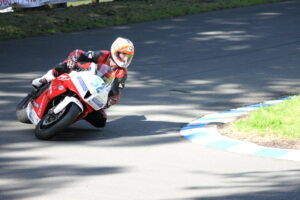 James Cowton is Honda mounted for this years superbike, superstock and senior TT races. James is competing in the big bike races at this year’s Isle of Man TT on a CBR 1000 Honda Fireblade backed by SJP Moto from Lincolnshire.

Having starred at the 2013 Manx Grand Prix which included leading both junior and super twin races and lapping at over 119 mph James goes into TT 2014 confident of achieving top results in all classes.

At Oliver’s Mount James starred throughout 2013. Amongst James best performances at the mount in 2013 where wins at the Barry Sheene road race festival, 4th place finish in the feature race at the cock of the north road races and a brilliant 3rd place finish in tricky conditions throughout in the Steve Henshaw international gold cup race.

James overall in the 2013 Duke road race rankings championship finished in sixth place to prove even more that James is one of the leading rising stars in road racing.

James entry for the first time competing on an 1000 on the world famous mountain course in the Isle of Man will be watched by many, TT 2014 is set to be an exciting time for James Cowton.