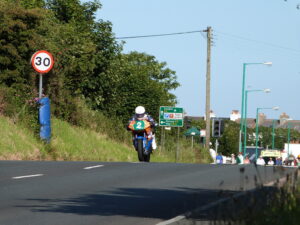 Dean Harrison is looking forward to the 2014 Southern 100. Dean who is competing this season for RC Express racing Kawasaki and Mar-train racing Yamaha for the supersport races had a fantastic Southern 100 in 2013 which saw Dean finish on the podium in every race in which he competed in.

Dean produced a sensational performance to win the supersport race, in a close race throughout Dean competing on the Ian Bell motorcycles backed R6 Yamaha edged out Guy Martin to take a superb victory. Dean was also victorious in the second super twin race which saw Dean competing on a ER6 Kawasaki for Stewart Smith racing win another close race this time edging out Ivan Lintin.