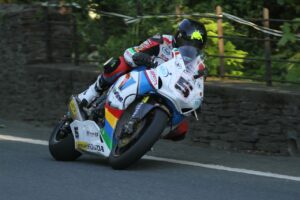 Bruce Anstey made it back to back top of practice sessions at TT 2014 by finishing on top in superbike practice on Tuesday with lap speed of 130.860 mph. Bruce competing for Valvoline racing Padgetts motorcycles is happy and confident in the potential of the teams superbike.

John McGuinness is getting better and better with each lap as his wrist continues to get better by each day. 20 time TT winner John lapped at 129.395 mph on Honda racing superbike.

Guy Martin produced a good lap speed of 129.164 mph whilst Michael Dunlop lapped for the first time at over 129 mph on factory backed S1000RR BMW in finishing fourth quickest.

Dan Kneen and Ian Hutchinson rounded out the top ten during a nights practice session which took place in great conditions all around the mountain course.

James Cowton produced a personal best lap speed of 122.246 mph in going 17th fastest, Cameron Donald lapped at 120.858 on SG3 Norton proving that the Norton is highly competitive this year.

Alan Bonner competing for the peoples bike team recorded a lap speed of over 115 mph whilst fellow TT newcomer Callum Laidlaw lapped at 107.4 mph and is happy with the progress that he is making around the mountain course.