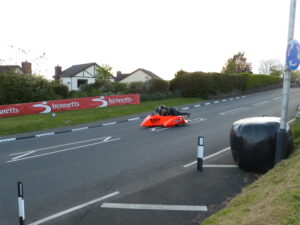 Dougie Wright is looking forward to the 2014 sidecar TT races. Dougie is competing in this years races on a high spec sidecar with help from Tony Baker, Martin Hull is Dougie’s sidecar passenger for TT 2014. Dougie and Martin at TT 2013 achieved a superb 5th place finish in the opening sidecar race.

Dougie has so far in his TT career attained six top ten finishes and was leading newcomer at the centenary Isle of Man TT in the sidecar class. Dougie has recorded many a top 3 finish at Oliver’s Mount and has being a top 10 finisher at the Southern 100, Dougie is confident that TT 2014 will see him achieve top results.