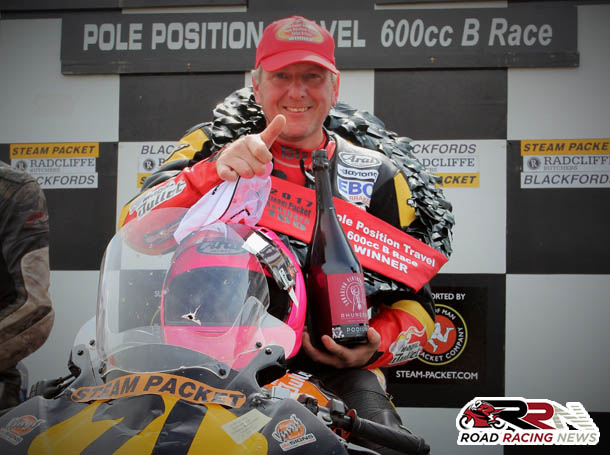 2004 Senior Manx GP winner Davy Morgan has recently reflected on his latest Southern 100 campaign, which yielded a vast array of strong results, including victory in the Supersport B race.

Add in 12th, 14th and 18th place finishes within the 600/1000, Senior and Solo Championship races, overall it was a positive week at Castletown for the popular racer, known to many for his customary pink helmet. 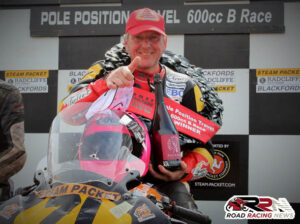 Speaking about his endeavours at Billown, Davy stated via his Facebook page:

“Road Racing is so much more enjoyable when the sun shines, after my good results at Skerries it is really satisfying to follow them up with some good results here.

The weather along with how you are treated here by everyone involved makes it one of the best meetings of the year and you can see why so many riders and teams want to take part.

Myself and the team enjoyed the whole week and the win on the Magic Bullet R6 just topped it off. It was all I could do after missing out on the A Race.

Although even riding the bike that handles really well as hard as I could my lap times would have still only been good enough for fifteenth or sixteenth in the main 600cc Race, so I really need to find more horses with Armoy and Dundrod coming up that are fast.”

“The Angry Bee ZX10 Kawasaki was going well and felling good although we are a bit down on top speed and I was knocking in and around my fastest ever times around Billown so I have to be happy with that.

A fuel issue with a blocked fuel pump tea bag on Wednesday and then I messed up a few times in solo championship race, which just took the edge of what could have been even better.

Again big thank you to everyone who helped throughout the week and made it happen. It was good to have Dave East back in the awning and hopefully he will be around a bit more in the future.

Faugheen next (hopefully) were I will have my newcomers bib on as I think its ten years since I was in Tipperary.”

A true stalwart of pure road racing, Davy’s remaining plans for the rest of his 2017 roads campaign, include as stated above a return to Faugheen, plus competition at Armoy, the Ulster Grand Prix, East Coast Racing Festival, Scarborough Gold Cup and potentially the iconic Macau Grand Prix.