Carl Fenwick One To Watch In 2014 Sidecar TT Races 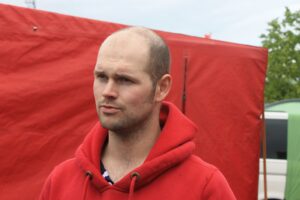 Carl Fenwick is one to watch in both sidecar TT races this year. Carl competing for his own team on a Yamaha engined outfit has Phil Knapton as passenger this year and is currently holding second place in British sidecar championship.

The rising sidecar road racing star’s confident of good results this year, practice week has gone well for Carl who has lapped at over 107.5 mph. In Carl’s own words its the same sidecar as from 2013 but all has changed and with good lap speeds already recorded during practice week the potential is there to secure top results.

Competing on the mountain course is totally different to competing on short circuits and its a challenge that Carl loves racing on the most famous road race circuit in the world.

In recent years Carl has become one of the leading drivers around Oliver’s Mount and the talented sidecar driver is aiming to be back at the mount this year at either cock of the north road races or Scarborough gold cup.

Benefitting from more track time in British sidecar championship has given Carl a sharp competitive edge going into TT 2014 where he could produce a surprise or two in what are set be to exciting, entertaining, thrilling and closely competitive sidecar TT races.