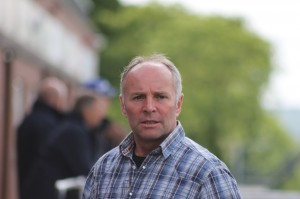 It was a drama filled 500 classic TT race which saw ten time TT winner Ian Lougher secure victory on Flitwick motorcycles backed 500 Paton. John McGuinness lead from the start only to hit reliability issues on opening lap which forced the 21 times TT winner out of contention.

From here Ryan Farquhar hit the front and lead on the opening lap as Ian Lougher was second and Michael Rutter and Dan Cooper where battling over third position. Rutter then lead after Farquhar and Lougher went into for pit stops at end of lap 1, positions out front remained the same for the remainder of lap 2 with Rutter holding a moderate advantage over Farquhar with Cooper slotting into third position.

Ian Lougher had a timing penalty from leaving the pit lane after pit stop which meant that Ian now had a lot of work to do to put himself back in contention for race victory. On lap three Michael Rutter still lead but he was reported to have retired on the Ripley land racing G50 Seeley this meant Ryan Farquhar now lead.

But more drama was to come as Farquhar became the third race leader to break down which meant Dan Cooper now had race lead with Ian Lougher charging behind in second position as Bruce Anstey and Michael Dunlop completed top four. Another high profile retirement was confirmed at end of lap three as Michael Dunlop entered the pit lane with issues arising on 500 Molnar Manx Norton.

On final lap Lougher charged his way to the front and by end of final lap was comfortably 34 seconds clear of Cooper to record his first classic TT victory. Dan Cooper was delighted with second position as Bruce Anstey’s brilliant 2014 road racing season continued with third position on Mckintosh Manx Norton. 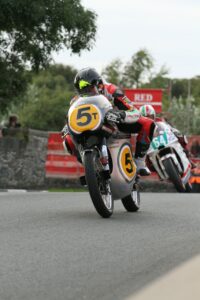 Peter Boast rounded out the top ten during a race which had a familiar pattern running through which was reliability issues for many of the top runners but for Ian Lougher there was none of these troubles as he recorded another great win in his illustrious road racing career. 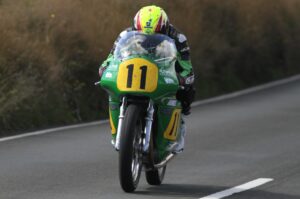